How climbing helped this transgender athlete explore their identity


Rock climbing is physically and mentally demanding, but for Lor Sabourin, it represents much more than just sport. ﻿Being a trans climber, Sabourin welcomes the vulnerability that climbing forces you to confront. #CNN #News


The CNN video on Youtube was downvoted by an overwhelming number of biggots and haters. They made it clear by their comments that they are cowards and afraid of trans people who are able to accomplish their goals.

The full version of the video below is well worth watching.

Posted by planet trans at 6:30 AM No comments: 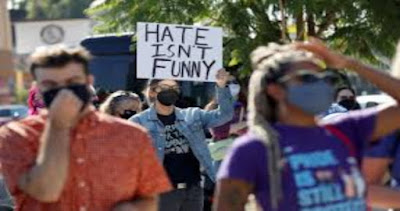 Students from David Chappelle's high school alma mater, Duke Ellington School of the Arts are enraged that the school could be bought off by him, and have promised direct action should the school proceed as planned.
LGBTQI and allied students at the Duke Ellington School of the Arts have promised a walkout over a planned fundraiser and renaming of the school in light of Chappelle's last special 'the closer'.

They have ended, at least temporarily, the administration's plan to rename the school after Chappelle in exchange for his donations, which the school stated was in the millions of dollars.
According to The Washington Post the Duke Ellington School of the Arts, in Northwest D.C., will postpone renaming its theater after comedian Dave Chappelle, one of the school’s most famous graduates, amid concerns from students about his recent Netflix special, the school said in a statement Friday.
A dedication was originally planned for Nov. 23. But the school said in a statement that “moving forward with the event … without first addressing questions and concerns from members of the Ellington Community would be a missed opportunity for a teachable moment.”

While LGBTQ organizations, Netflix employees and some Duke Ellington students have criticized Chappelle’s latest special, “The Closer,” for his comments about transgender people and the LGBTQ community, the renaming of the theater will go forward on April 22, the school said..
Teachable moment = Force art students to accept the administration's opinion or face expulsion. #MoneyMatters more than #BlackTransLivesMatter
TDoR 2021 the deadliest of years: The US has become a slaughterhouse for trans people

Chappelle speaking as if from personal experience skewered transgender vaginas as  'beyond pussy' and 'pussy 2.0' much to the delight of his audience.

Meet Daphne Dorman, The Trans woman who Killed Herself After Dave Chappelle Humiliated Her
A beautiful young transgender woman took her life shortly after Chappell befriended and had her open for him, then beat down on her in an earlier performance.
National Black Justice Coalition Urge Netflix to Remove Dave Chappelle’s ‘The Closer’ Special

Chappell self-identified in the closer as a member of 'Team TERF' which is an acronym for Transgender Exclusionary Radical Feminist. The irony of this is TERFs hate the name or being pigeonholed into an agenda. And by doing so while beating down on transgender people Chappelle was attacking the very base of his audience.
Petition: Remove Dave Chappelle's special 'The Closer' from Netflix

Later Chappelle crowed about his sell-out crowd during his first appearance following 'the closer'.

However, he shouldn't get too used to that since TERFs comprise a tiny minority of feminists and white supremacists who applaud his bashing of LGBT people on line, won't be buying tickets for future performances for obvious reasons.

Posted by planet trans at 7:28 AM No comments: