A transgender woman was found shot to death in her southwest Houston Apartment on Dunlap and Clarewood streets Saturday evening.

According to ABC 13, the yet unnamed woman lived alone and was found by her boyfriend about 8pm on Saturday evening.

Neighbors reportedly told investigators that they didn't hear gunshots so police are assuming that she was murdered earlier in the day when fewer people were at home.

The latest murder is the seventh transgender murder to occur in the greater Houston area and the 13th to occur in Texas since January 1, 2020, according to the TDoR Translivesmatters website.

Posted by planet trans at 4:17 PM No comments: 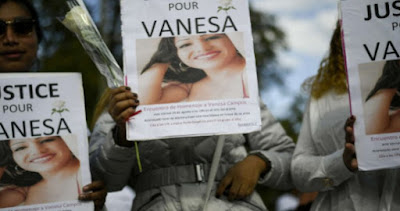 Transgender activist and sex worker Vanesa Campos, came to Paris from Peru in 2016 seeking a better life. But because of her undocumented status and her refusal to bow to thugs, she was brutally murdered in 2018.

Vanesa Campos and other sex workers had been forced in the deepest recess of Bois de Boulogne, a park in Paris due to a law that criminalized their clients. Per the 2016 law, clients face up to €1,500 ($A2393)($1,700US) in fines for a first-time offense, as well as a €3,750 fine ($A5982)($4,253.7USD) for a repeat offense. They did this to give clients a sense of security. But one August night the law that was intended to make her life safer became instrumental in her death.

Vanesa Campos Vasquez was the type to raise her head high and puff out her chest when she was insulted "travelo" in the middle of the street, noted Liberation France shortly after her murder. Of the type also to draw her best smile when she was assigned an outrageous "Sir" by a stranger. In short, a trans and proud prostitute who despised insults and threats. “She was always the first to come and defend a girl when she was pissed off by shady men during her working hours, sums up her friend Nicky. She was a hell of a big mouth who wasn't afraid of anything."Vanesa Campos Vasquez, 36, originally from Peru and living in France for two years, was a pillar of the community of trans and Peruvian sex workers in the Bois de Boulogne. She died at her place of work, on the night of August 16 to 17, killed by a bullet in the chest.

Prostitute, trans and undocumented, Vanesa Campos died in almost general indifference, regretted the associations. The day after the murder, the Sex Work Union (Strass) deplored it in a press release: “We have this strange impression in us that our deaths do not arouse any emotion. For us, there is never any national mourning. There is never an official commemoration. […] Murders of trans women sex workers are not uncommon. […] Our deaths are normalized. A whore who dies is a bit like killing a video game character, it doesn't matter. It's a bit like a sexist joke, we laugh about it, then we move on.

The trial over the 2018 murder in Paris of Vanesa Campos, a migrant trans sex worker, has ended. Two men have been charged with ‘gang murder’ and sentenced to 22 years in prison. Six other men have also been sentenced.

The murder of Vanesa Campos happened in a context of increasing criminality in the Bois de Boulogne. Throughout the summer of 2018, a gang of Egyptians were racketeering prostitutes and their clients, their attacks were daily. Vanesa Campos tried to alert the police during one of their patrols, however, due to a lack of proof the officers did not respond to her complaints: “It is always the same. They would ask for their identities, but we didn’t know them. Even though we were very precise in our descriptions, they just wouldn’t listen. After all, we were just a bunch of hookers. Who cares about us?”

Testimonies show, indeed, that police officers would mock and humiliate trans prostitutes and undocumented immigrants instead of helping them. Those who were both undocumented and working as prostitutes never dared file official complaints at the police station for fear that they would get deported.

Vanesa Campos then implemented the use of an alert signal for dangerous situations and handed out tear gas canisters to her fellow prostitutes. She hired a bodyguard, himself an undocumented worker, who on August 14, 2018, managed to scare off one of the gangers; the latter, on the same night, broke into a police vehicle and stole a gun (other sources place the theft on August 9). On August 16, 2018, at about 11pm, the Egyptians came back in numbers and attacked the bodyguard.

Vanesa Campos was then left alone to face them and screamed for help: “¡Chicas todas!” One of the assailants then shot her in the chest before shooting several times into the air. They went at her fiercely and unrelentingly using utility knives, sticks, and a handgun, they then fled the scene in a car. At 11.30pm, Vanesa Campos's colleagues found her lying in a pool of her own blood. Paramedics, who arrived 30 minutes later, were unable to resuscitate her.

The Paris court found Mahmoud Kadri, 24, and Karim Ibrahim, 29, guilty of “gang murder”, charges they have repeatedly denied, instead both blaming each other.

The prosecution had recommended on Thursday that Kadri be sentenced to 20 years in jail. He has denied claims from his fellow accused that he shot and killed Ms Campos on the night of August 16, into August 17, 2018.

The prosecution recommended 15 years in prison for Ibrahim, accusing him of complicity to murder.

One of them was handed six years in jail for violence that led to an unintended death.

Four more received varying sentences of up to six years in prison for taking part in the assault.

The sixth was to be jailed for five years for stealing the pistol from the police officers car that was used to kill Vanesa.

Her body was repatriated to Cayaltí. Although her civil status had not been changed, upon a request of her mother, her tombstone does bear the name Vanesa. A small memorial was set in the Bois de Boulogne to pay tribute to her memory.