How Junk Science is Being Used Against Trans Kids 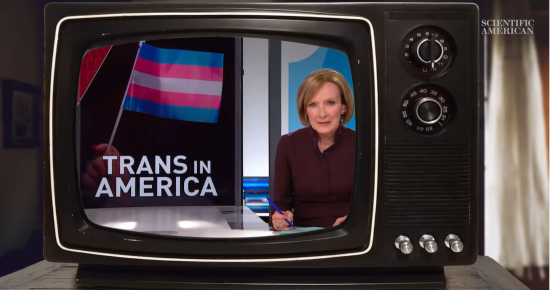 This short Scientific American video explores how Junk Science is being used against transgender Kids.

Posted by planet trans at 5:55 AM No comments: 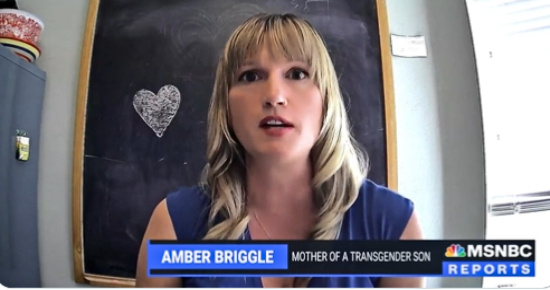 Amber Briggle, a TX mom of a transgender child has "no more words" to say to AG Ken Paxton, who’s labeled gender-affirming care for kids as child abuse. "He broke bread with my family and now he says that families like mine should not exist."

Mrs. Briggle was afraid for the safety of her children if she left them with loving relatives while she went to the GLAAD media awards. Her main concerns weren't about whether her kids would get enough to eat or make it to school on time. But about the Texas official state criminals should they steal them while she was away.

"The more people who are brave enough like Amber to tell their stories, the more we can engage Hollywood to have stories about our families and who we are. The more that people will understand." @sarahkateellis on @HallieOnMSNBC with @mrsbriggle talking attacks against trans kids pic.twitter.com/J0t0UcaDZf

'I am angry every single day because of the way the world treats my son' — Mom Amber Briggle delivered a tearful speech at the GLAAD Media Awards after being investigated for providing gender-affirming care for her trans son in Texas.

Thank you, @nowthisnews, for capturing the highlights of my speech at the @glaad awards. We need more people, orgs, and corporations to hold our elected officials accountable and stand up to #ProtectTransKids. https://t.co/TLxE5C4mz0

"I’m terrified because I’m the parent of a trans child. And I’m afraid that by speaking here today, my words will be used against me should #SB1646 or #SB1311 pass, & my sweet son whom I love more than life itself, will be taken from me." 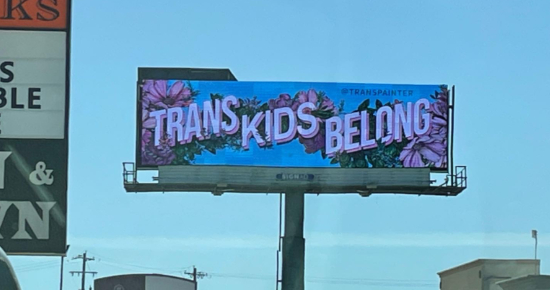 Over 200 billboards in nearly every state displayed a transgender-inclusive message on the Transgender Day of Visibility. The artwork is courtesy of non-binary artist Rae Senarighi and is made possible with funding by the group Have a Gay Day.

The digital "blips" display for 10 seconds rotate with other paid messages. They are a powerfull way of reminding us and the general public that our lives truly do matter.

Rae wrote on Facebook "🏳️‍⚧ 205 billboard locations across the United States! 🏳️‍⚧ A huge thank you to Have A Gay Day for fundraising and spearheading this enormous billboard effort. They will be announcing all of the locations shortly! Just in time for Trans Week of Action (happening now) and Trans Day of Visibility on March 31st. ❤"

A digital billboard in Alvin, TX of all places. Thank you @transpainter and @HaveaGayDay! pic.twitter.com/giehqwQ8eN

Some of the locations:

Alaska no signs available at this time

Arkansas Bentonville, Double sided billboard at Walton Blvd at Rainbow Curve Texarcana, double sided billboard, located on a 1-way feeder road for I30E. Excellent visibility from the Stateline overpass and I30. Beside El Chico’s Mexican Restaurant. Across I30

Colorado North Washington, Double Sided Billboard on 224 with visibility also on I-76 traffic as well as the I-76 westbound entrance ramp from I-270. Monument, Double sided billboard (I-25) heading inbound into the Colorado Springs area. Near Woodmore

Delaware Not available at this time

Hawaii Not available at this time

Idaho Nampa, Highway 84 and east times square east bound facing, left side of the road when driving Illinois Chicago – near 55 and South Archer Chicago -near Stevenson and S. Wabash Chicago – on west 55th near 25th

Indiana Lake Station, Double sided billboard near I-80 / 94 near east 18th ave. Clarksville, Right-hand read for southbound traffic on I-65 at MM 1.10. Above Tom Stinnett RV. Iowa Dubuque, Located on HWY 20 at a major intersection, HWY 20 and Old HWY Rd, at the west end of town. Very close to the County fairgrounds

Kansas Wichita: Left Facing Right Next to Us 81 – North Bound Newton, along the I-135 between 24th and 36th Streets in Newton, KS. This billboard is a left hand read Wichita, Right read sign right next to the Road on US – 82 Wichita, Located just East Kellogg Dr just East of Rock Road. Motorist Traveling West on Kellogg to most Major businesses and Shopping areas in Wichita. Around the corner from Towne East shopping Mall.

Louisiana Lafayette I-10 Near I-49 West Facing Bossier City, Located at a 4 way stop on Pines Road @ Financial Plaza immediately off I20 E. exit. Gonzales, off highway 61 South Bound

Michigan I-75 at Waterman Ave South Facing Romulus, I-275 traveling south to Western Wayne County, and Monroe toward Toledo, Ohio. It also reaches people exiting to Detroit Metro Airport’s west entrance by being the last billboard before the exit. Allen Park, South Bound 75 near goddard Ave. Lincoln Park, South South 75 East facing Detroit: northbound I-75 Also visible to I-96, I-94, or just continuing on Northbound I-75. This digital billboard has additional bonus viewing from Fort St. and Waterman Ave, in the heart of SW Detroit, directly across from produce terminal. Bonus view: Fort St. at a traffic light. Rochester Hills, Can be seen traveling east on M-59 towards Warren, Sterling Hgts, Shelby Twp., Utica, and Madison Hgts and from I-75, Auburn Hills, Bloomfield Hills, Bloomfield Township, Southfield, Troy, Pontiac, Clarkston, Waterford . Auburn Hills, north bound I-75

Mississippi Pearl Near I-20 and I-49 East Facing Magee, double sided billboard located on Hwy 49 in Magee, MS. It is located right at the intersection as you turn into Walmart, across the road from Berry’s Seafood.

Montana Billings West bound Traffic Near I90- and 87

New Hampshire No billboards available at this location

Rhode Island not available in this location

Washington Everett, located in North Seattle near the intersection of two major freeways: I-5 and I-405. It is in close proximity to the Alderwood Mall Tacoma, Visible on 72nd St E at Canyon Rd E intersection.

West Virginia None available at this time

Posted by planet trans at 8:38 AM No comments: