Why is the Dallas LGBT resource center trying to get a sports championship moved to Texas? 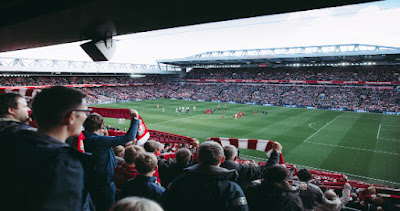 The ink hasn't dried on the Texas Trans student Athlete Ban, the NCAA has ignored our demands that they stand behind their promises, and the Communication Director of the Dallas LGBT center is working to get a major league sporting championship moved to Texas.

Rafael McDonnell, Senior Advocacy, Policy, & Communications Manager at Resource Center located in Dallas Texas said on Facebook that he  "filled in for the boss at a reception to welcome an international soccer delegation scouting out North Texas as a potential 2026 World Cup site."

I asked him "How do you reconcile that with the legislature's trans student athletic ban?"

"I am hopeful that bans like the one here in Texas will be struck down in the courts. We've already seen challenges in other states with more favorable federal courts. If SCOTUS' reasoning in last years employment cases holds true, that is another hopeful sign. Four years is a long ways away, and it's by no means certain that North Texas will get any of these games," said McDonnell."

McDonnell continued "Several of the sites under consideration have also passed similar (and worse) legislation...Nashville and Miami jump to mind. Mexico is on thin ice about hosting games in the current three-nation bid because of team fans repeatedly using homophobic and transphobic chants. FIFA (the governing body of international soccer) Is has been criticized for giving next is giving next year's World Cup to Qatar because of that country's human rights record, so they are going to look closely at that before making final location choices."

Jesus Christ. All I see now is a gay man rationalizing backstabbing trans kids. That is deplorable. I mean, has Abbott even signed the bill into law yet?

In response to the Texas Rangers once again omitting any reference to LGBT kids on MLB Spirit Day McDonnell told the Dallas Morning News “To me, the Rangers are a bunch of scrappy guys who play their hearts out every day and you love that,” he said. “But the more this keeps happening, it becomes more difficult to love something that doesn’t even acknowledge you exist.”

And yes the worse is yet to come. The floodgates have opened and Texas will be full-on attacking trans people in the next legislative session.

And to tell you the truth as a designated persona non grata it really has been hard to support the North Texas gay community or the scrappy crew from Equality Texas.

To quote Rafael McDonnell "...the more this keeps happening, it becomes more difficult to love something that doesn’t even acknowledge you exist.”
Posted by planet trans at 7:41 AM No comments:

Dave Chappelle open to a conversation with "transgenders" about cancel culture

"No more jokes about transgenders until we can all laugh together," Dave Chappelle told TMZ via his rep.

According to TMZ he is willing to talk to the Netflix employees if they invite him to converse about their "cancel culture" and hopefully to  "make some sense".

Chappelle's rep tells TMZ ... "Dave stands by his art: No more jokes about transgenders until we can all laugh together. The streets are talking and Dave is listening. At some point, when everyone is open, I’m sure the communities will come together."

Which 'communities' are Chappelle referring to? Transgender people for sure, he made fun of us during his special, but the other one?
Chappelle got paid $5,000,000 for his last transphobic tirade. Millionaires perhaps?

Who knows. He made divisiveness the center point of his comedy.

He could start with telling his rep. that the word "Transgender" is an adjective, not a noun. That could be a start.

What did Chappelle say about transgender anatomy that is being talked about of the street?

“If your satire is punching down, you are being a bully. It’s not funny. So I’m standing in solidarity with the folks here at Netflix who are saying, ‘we ain’t having it.’ Not on our watch.#NetflixWalkout pic.twitter.com/UOyMCKTBDp

“Gender is a fact. Every human being in this room, every human being on earth, had to pass through the legs of a woman to be on earth. That is a fact," Chappelle says in the special. He defended Harry Potter author J.K. Rowling, who has faced allegations of transphobia for years. “They canceled J.K. Rowling — my God," he added. "Effectually she said gender was a fact.
The trans community got mad as s***, they started calling her a TERF," Chappelle continued. (TERF means "trans-exclusionary radical feminists," whose views about feminism are seen as anti-trans.) "I'm team TERF," Chappelle said. "Gender is a fact."

Meet Daphne Dorman, The Trans woman who Killed Herself After Dave Chappelle Humiliated Her.

On this day we remember the 408 transgender people who committed suicide, were shot, stabbed, burned alive just for living their truth during the previous reporting period.

No joke, Chappelle, this happens on every continent in hundreds, perhaps thousands of places. They even have TDoR's in Russia where Putin, Chappelle's only political ally similarly ridiculed transgender people in support of him. The only difference is Putin isn't hiding behind a veil of comedic inference. He just kills us.
Posted by planet trans at 8:19 AM No comments: