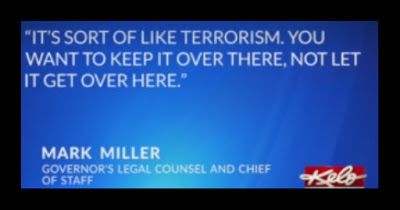 Senate Bill 46, a bill that would prevent transgender girls and women from competing on the sports teams that match their gender, passed the GOP-controlled House State Affairs Committee Wednesday morning.

But it didn't pass without arguments from Gov. Kristi Noem's top staffer, who said transgender peoples' participation in sports is akin to terrorism.

Governor Noem, a trump wannabe with a pathetic history of failed legislation is seeking to end those transgender-inclusive policies and institute strict policies of exclusion and segregation.

During the committee hearing held on Wednesday, a lawmaker asked Dr.Wade Pogany, Executive Director of the Associated School Boards of South Dakota, whether all school boards are in favor of the current transgender athlete policy by the SDHSAA (South Dakota High School Athlete Association).

Dr. Pogany answered that representatives from every school board are invited to Pierre and resolutions are debated and voted on. The school boards voted in favor of using the current SDHSAA policy. It was an overwhelming majority, Pogany says.

A lawmaker then asks, are there any medical reasons to deny transgender women from playing sports. A doctor says no, there is no merit to the claim that transgender athletes have an advantage.

A lawmaker asked what’s wrong with the current transgender-inclusive SDHSAA policy. Gov. Noem’s Chief of Staff, Mark Miller, answered by saying that they believe it is better to have a law in place, not a private policy. Representatives then ask whether Miller has seen this policy fail.

Miller told the committee that with other states allowing transgender girls to compete, this legislation would be like addressing terrorism, by “not letting it get over here.”

When asked if she would sign the bill if it makes it through the House Thursday, Noem said “absolutely.”

It is exactly what Noem and her chief of staff meant to say. Time after time humanities history is littered with fascist regimes who first segregate then annihilate those that are different from them. This is just history repeating itself.
Posted by planet trans at 8:33 AM No comments: 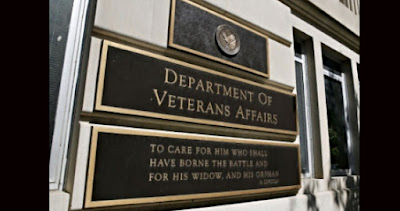 The Department of Veterans Affairs began including gender identifiers in its national medical record system in December 2021 to help VA providers better understand and meet the health care needs of Veterans.

VA added transgender male, transgender female, non-binary, other or does not wish to disclose options to its new gender identity field, according to the January 12, 2022 Press Release.

Providing this option demonstrates the agency’s commitment to delivering care fitting the individual needs of Veterans enrolled in VA health care, including transgender and gender-diverse Veterans.

“Our goal is to align the department’s policies and procedures with the president’s vision for a more inclusive government,” said VA Secretary Denis McDonough. “All Veterans, all people, have a basic right to be identified as they define themselves. This is essential for their general well-being and overall health. Knowing the gender identity of transgender and gender diverse Veterans helps us better serve them.”

Posted by planet trans at 5:26 AM No comments:

Email ThisBlogThis!Share to TwitterShare to FacebookShare to Pinterest
Labels: records, The Department of Veterans Affairs, transgender

Four transgender women were ordered by Tripura police to remove their clothes Saturday night while they recorded their apprehension on social media. After they were stripped and humiliated they were forced to sign a statement that if they 'cross dressed' again they would be arrested.

This happened on Saturday night when the four women were on their way back from a party organized at a hotel in the capital city of Tripura when they were stopped by police and taken to custody, Hindustan Times reports

“While we were coming back from a DJ party in a hotel at around 11 pm on January 8, a few police personnel and a man who claimed to be a reporter stopped us. We were taken to West Agartala Women Police Station where we were asked to strip in presence of both male and female police in the night. They even taunted about our dress code and character, “ said Mohini, one of the transgender women. She added that they were accused of extorting people with fake gender identity.

The transgender women claimed that their source of income through make-up art has suffered loss since a few videos of their harassment became viral on social media.

However, some of these videos were deleted from social media after they sought intervention of the Agartala Press Club.

They also alleged that the police made them sit on the floor and did not get them food even after telling the police that they were hungry.

“We demand justice for ourselves and action against the police personnel and the reporter who were in the police station on the incident night, “ she said.

Sneha Gupta Roy, an LGBTQ+ rights activist and a transgender person, said, “Their life at home and in their localities are stigmatized after videos of their harassment went viral on social media. This has also caused pain to our community both psychologically and emotionally.“

“It’s all about struggle for identity. Whatever happened is violation of human rights. We will fight legally to get them justice, “ said Nilanjana Roy, counsel of the distressed transgender persons.

Later, on Monday evening, they filed a complaint at West Agartala Police Station.

An official from Tripura police, on the condition of anonymity, said that they were arrested under Section 51 of the Indian Penal Code (IPC) having provisions of preventive arrest.

“I have heard they were held under Section 51 of IPC and we have asked for a report to ascertain on what grounds they were arrested,” said the official, adding that they can seek intervention of either the Human Rights Commission or Police Accountability Commission if they have faced harassment.

Posted by planet trans at 9:55 PM No comments:

Lia Thomas is being given support by the NCAA, her school, and the Ivy League. Her participation on the woman's swim team may have gone unnoticed. But when she succeeded and broke records she became a lightning rod for vitriol commentary.

This sends a dangerous message to trans people everywhere, do your best and pay the consequences.

The women are in second place after day one of the Zippy Invitational.

Lia Thomas set a pool and meet record in the 500 free!

In response, both the Ivy League and University of Pennsylvania have issued messages of support for Thomas, making it clear she is abiding by NCAA guidelines, Give Me Sports reports

"The Ivy League reaffirms its unwavering commitment to providing an inclusive environment for all student-athletes while condemning transphobia and discrimination in any form."

"The league welcomes her participation in the sport of women’s swimming and diving and looks forward to celebrating the success of all of our student-athletes throughout the season."

The Ivy League releases the following statement of support regarding Penn's Lia Thomas' participation on the women's swimming and diving team. 🌿 pic.twitter.com/wdEDW4ud5O

Transgender woman Duval Princess was found unresponsive in the parking lot of the Ceil Luxury Apartments, Jacksonville Florida on January 2, 2022, shortly before 2 am.

Officers initially responded to a report of a traffic crash at Ciel Luxury Apartments on Skyway Drive shortly after 2 a.m. Upon arrival, they found a woman lying outside of a car in the parking lot.

First Coast News in an article dated January, 2nd reported her as an unidentified man.

However, local black advocates contacted TransGriot informing the trans news outlet that the victim was a transgender woman who went by the name Duval Princess.

Duval Princess was transported to a local hospital where she was pronounced dead. However, medical staff at the hospital told investigators that the woman's injuries were not consistent with a traffic accident. After receiving this information, JSO's homicide unit responded to the scene.

Detectives are currently treating the investigation as a suspicious death and said foul play is suspected.

The cause of death is pending an autopsy from the medical examiner's office.

"Only 26 hours into the new year, and the fatal shooting of a Black Trans/ GNC person occurred in Jacksonville, FL. Tevin Robinson, also known as the Duval Princess, was found unresponsive in the parking lot of an apartment complex. Robinson was initially transported to a local hospital because of injuries that were believed to be sustained in an automobile accident; however, a postmortem evaluation indicated the presence of fatal gunshot wounds. Robinson was 24 yrs. old."

For those wishing to help with final arrangements, the family has set-up a GoFundMe

As police continue to investigate, JSO is looking for surveillance videos or witnesses that can provide information on how the man died.

Anyone with information about this incident is asked to call JSO's non-emergency number at 904-630-0500 or email JSOCrimeTips@jaxsheriff.org. You can also remain anonymous by calling First Coast Crime Stoppers at 1-866-845-TIPS.

Posted by planet trans at 5:14 AM No comments:

Transgender woman Amarey Lej (Myara) was found dead at 6am Jan. 1st by police responding to a report of a woman lying in the street on the 1300 block of Wood Street, Wilkinsburg, PA. Police determined that Amarey Lej died from a fatal gunshot wound.

Amarey Lej was a coach for the Lady Diamonds 💎 & Rams Org. youth dance team and remembered by friends as a positive light for her community.

Homicide detectives with Allegheny County Police have launched an investigation. They ask anyone with information about this incident to call the County Police Tip Line 1-833-ALL-TIPS.

Posted by planet trans at 4:24 PM No comments: