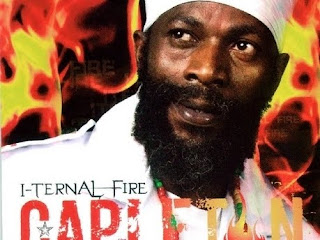 A few weeks ago the Gay Liberation Network (GLN) politely contacted Kinetic Playground owner Jim Gouskos to inform him about Capleton's history and attempt to persuade him to cancel the concert.... Gouskos claimed that he was locked into a contract which prevented him from canceling, to which we replied that many other venues, such as Chicago's House of Blues, have successfully canceled other "kill gays" performers.

In a follow-up conversation, GLN organizer Roger Fraser said that in the event that Kinetic Playground refused to cancel Capleton, there would be a protest. Gouskos replied, "Don't threaten me because I can get a bunch of goons outside to throw eggs at you guys."

Goons or not, the protest is now on --

Background --
WHO IS "CAPLETON"?

Capleton is a performer in the Jamaican "dancehall" tradition who promotes violence against Lesbian, Gay, Bisexual, and Transgender (LGBT) communities in his lyrics. One of his songs is entitled "Bun out Di Chi Chi," which translates to "Burn the Queer," and an example of one of his lyrics is the noxious:

In 2004, Capleton's scheduled concerts in three venues in California were canceled after LGBT pressure was applied because of his calls from the stage to kill gays.

Losing lots of U.S. dollars because of cancellations, Capleton and a few other anti-gay reggae singers finally in 2007 felt compelled to sign a document known as the Reggae Compassionate Act, which is a pledge no longer to sing or otherwise profit from songs that promote violence against LGBT people. However, Capleton quickly violated the terms of the agreement. As a result, his tours in Switzerland and France were canceled in 2008.

As recently as last Christmas in a Jamaican concert, Capleton again loudly proclaimed to his audience: "All who a bun battyman and sodomite, hand up!" ("All who have burned queers and sodomites, put your hands up!") This outrageous call to celebrate murder caused LGBT activists in Long Beach, California, to mobilize, and promoters cooperated by canceling Capleton's invitation to participate at the prestigious Reggae Muffins Festival last February.

Our current protest has already generated substantial coverage in the reggae music press, and one of Jamaica's most prominent newspapers, The Gleaner, has given the protest surprisingly favorable coverage:
This Saturday night, please help stand up to the hate that promotes violence against young and old in our LGBT community.

Take us OUT to the ballgame: Time for Rangers to join majority of MLB teams, sponsor a gay night

I’ve always loved baseball. It takes me back to summer nights at my grandparents’ house, listening to games on a crackly AM radio, dreaming of the word pictures painted by the play-by-play announcers in faraway places.

Later, I was lucky enough to work at the flagship radio station for the Texas Rangers, and got to see in person the team’s first two playoff appearances. That’s why I was especially happy to see the Rangers make the playoffs again this year, after an 11-year break.

At the same time I was cheering on the Rangers, it made me think. Why hasn’t the team conducted its own outreach event directed to its LGBT fans? For that matter, why haven’t any of the other major sports teams in North Texas held such an outreach?

By my count, 16 of the 30 Major League Baseball teams had held LGBT-specific

community days prior to this season. The Chicago Cubs — the only MLB team with an LGBT owner — have held their event since 2001. The Philadelphia Phillies started theirs a year later. Other teams, from Los Angeles to Denver and New York to Tampa Bay, have also conducted similar community days.

This year, two more teams held LGBT community days: the St. Louis Cardinals and the Houston Astros. Both are significant because the teams themselves were the driving force behind the events.

The Astros called their event “Pride at the Park,” donated a portion of ticket sales to seven local LGBT nonprofits, and invited the Bayou City Chorale, a chorus made up of gay men and lesbians, to sing the national anthem.

According to the Houston Press, more than 1,000 members of the LGBT community attended the game. Other reports indicate there was no major opposition to “Pride at the Park.”

Earlier this month in St. Louis, about 200 members of that city’s LGBT community attended the Cardinals’ first-ever “OUT at the Ballpark” after the team reached out to Pride St. Louis.

In Minneapolis this past July, the fourth annual “Out in the Stands” event hosted by the Twins drew more than 1,200 fans to Target Field. For $25, attendees received a game ticket, admission to a pre- and after-party, and a T-shirt.

So, what about the Texas Rangers?

In 2003, roughly 200 tickets were sold to a community-generated, non-team-sponsored event. The event, spearheaded by then-employees of Resource Center Dallas, hoped to draw 1,000 members of the North Texas LGBT community.

It also drew protests from church groups. Since then, there have been no other similar events involving the local major sports teams and their LGBT fans.

The Rangers are under new ownership. With Chuck Greenberg and Nolan Ryan in place, the team has reached out to fans by cutting prices on concessions, beer and parking. Have they considered an “LGBT Day at the Ballpark”? If so, would the community support it and attend? What should happen at such an event?

If the team hasn’t thought about holding such an event, we can encourage them to do so. Send them an e-mail, make a call or write a letter. Congratulate the Rangers on winning their division, and ask them to hold an outreach “day at the Ballpark” event for their LGBT fans in 2011. Show them that an event like this would be great for both the fans and the team.

And while were at it, Mavericks and Stars — some of your peer teams are having similar events. In the NBA, The Philadelphia 76ers, Golden State Warriors and Toronto Raptors have held LGBT events, as has the NHL’s Atlanta Thrashers.

This would be a tremendous opportunity to reach fans that may feel marginalized because of their sexual orientation or gender identity, and build a lasting loyalty to the teams. As best I can tell, no NFL team has conducted an LGBT outreach event, including the Cowboys.

It’s no secret that homophobia is an issue in sports — two-thirds of sports reporters identified it as a problem, according to a study conducted last year by Penn State University.

But events like LGBT community days at sporting events are a step toward fighting it. 2010-2011 isn’t 2003, and if the Astros can reach out to welcome the community, so can the Rangers.

Rafael McDonnell is strategic communications and programs manager for Resource Center of Dallas.
Posted by planet trans at 4:27 PM No comments: