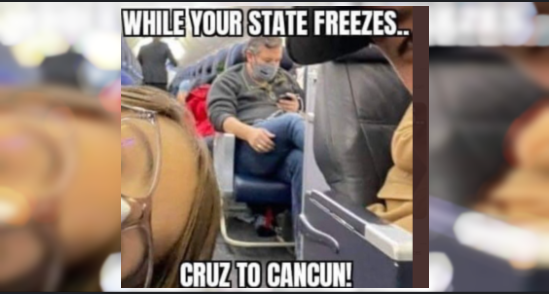 Texas Senator Ted Cruz flew to Cancun Mexico as we suffered in freezing weather without electricity for a spur of the moment 'family vacation'.

In the tweets below you can see Ted Cruz board a flight for Mexico, with his wife and daughter for company.

Sources say that Ted Cruz had booked a return flight for Saturday but changed his itinerary for a flight back yesterday, Wednesday,  2/17/2021.

Ted Cruz went on vacation as the GOP created statewide power outages left millions without heat in 5 degree temperatures as  Covid-19 ravaged our citizenry. On top of that, many in the state, like me still don't have drinking water.

In desperation I accepted an invitation to stay with a friend in Dallas despite being warned she may have been exposed to someone with Covid-19. It was a difficult long trip but I was thankful.

However when we got there the conditions were terrible so I sat on the floor near their door crying and searching for for someone, anyone who would save my kitty and I from freezing.

I finally found our haven last night at a UU church...so I didn't get back in time to help with this..

This while the inoculated Ted Cruz enjoyed his privileged life in comfort with his inoculated family while his duty was here, with the people he swore to serve. I am enraged beyond words and so are many of his other constituents.

Hey Kathy — that screenshot was sent to me by the person who took the photos, showing the time taken was today.

Two people in my DMs sent photos of Ted on their flight today from Cancun.

The guy standing in the hat on the left pic is also the guy taking the picture on the right pic.twitter.com/KkAsOZfbzX

Heidi Cruz behind Ted Cruz and his daughter with the cop near in Houston on the way for a four day vacation while I freeze in my unheated apartment.

My daughter sent this pic.twitter.com/97tSjbO6aa

My grandma— a 100 year old lifelong Republican(turned Democrat in 2016), wife of WWII veteran, freezing in her own home #AbbottFailedTexas pic.twitter.com/97uPgQVxb5

A stringer in Cancun got these shots of Ted Cruz taking an early flight back to Houston. Notice please how deserted the terminal is. ALSO, WHY THE TEXAS COVID MASK TED?

Senator Ted Cruz carries his luggage at the Cancun International Airport before boarding his plane back to the U.S., in Cancun, Mexico. Photo by Stringer pic.twitter.com/KKDtldAXoE

"Yesterday my daughters asked if they could take a trip with some friends, and Heidi and I agreed, so I flew down with them last night, dropped them off here and now I'm headed back to Texas." pic.twitter.com/5d8UwlmZWv

It has been confirmed with United Airlines that Cruz was scheduled to return back CUN/HOU on the late afternoon Saturday flight (4:45PM). That FACT/EVIDENCE thing is a bitch.

Texans are suffering without power because those in power have failed us. As with Covid, a natural disaster has become far deadlier due to the inaction & ineptitude of Abbott and Texas’ Republican leadership. This didn’t have to happen and doesn’t have to continue. 1/4 pic.twitter.com/fqEun4fU97

According to the grid operators the wind power generation units operated better than expected producing peak enegery despite not being winterized as manufacturers recommended. The reason Texas suffered when others states didn't is a result of greed and one party rule.

Texas has detached it self from the national power grid making this failure an inevitability.

UPDATE: Sen. Ted Cruz has returned to Houston from his short trip to Cancun https://t.co/WRhcV5nrNV pic.twitter.com/maXIaglU8M

On behalf of all of us Texans freezing our asses off right now. Fuck you Greg Abbott, Fuck you Ted Cruz, Fuck you Dan Patrick, Fuck you Crenshaw, Fuck you Cornyn, Fuck you to all Texas Republicans pic.twitter.com/rTaCSPGuRM

Posted by planet trans at 7:28 PM No comments: