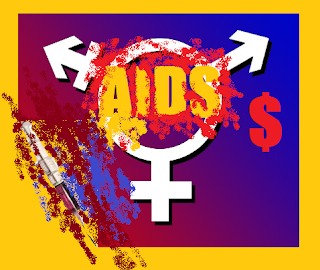 Source August 12, 2011 report from the Centers for Disease Control and Prevention HIV among Transgender People

"Approximately 90% of MtF and FtM people newly diagnosed with HIV infection were black or Hispanic. Newly diagnosed transgender people were more likely to have been in their teens or twenties than their non-transgender counterparts. Also, among newly diagnosed people, 50% of transgender women had documentation in their medical records of substance use, commercial sex work, homelessness, incarceration, and/or sexual abuse as compared with 31% of other people who were not transgender."


Not surprisingly, low self esteem and a need of validation are among the main factors for the high rate of HIV infection in the transgender community. It's important to talk about and not something for the "religious" right to use as a weapon to validate there contention we would just disappear should infected transgender people be ignored and untreated. That's part of the final solution they are fervently trying to legislate in Uganda's reanimated "Kill Gay" bill.