Transgender woman Amy Schneider made history on the popular daytime game show “Jeopardy!” that aired on Wednesday, winning for the 21st time and breaking the record for most wins by a woman.

In Tuesday's episode, Today reports she tied the 2014 record set by Julia Collins.

Dawn Ennis interviews Amy Schneider for the Daily Beast and asks her about being a trans person in such a high profile situation.

“I really want to praise everybody on Jeopardy!” Schneider said. “Until I brought it up, they never mentioned or referred to me being trans. And had I not brought it up, it was clear that they wouldn’t. And it would never have been commented on if I didn’t want it to be. I really appreciated that about them. I never had one even mildly uncomfortable moment around that with anyone on the Jeopardy! staff, and that was really, really great.”

So why out herself at all?

The former title holder Larissa Kelly congradulated Amy on her win, "Well, it was fun to hold a Jeopardy record for a few years...but it's been even more fun to watch @Jeopardamy set new standards for excellence, on the show and off. Congratulations to Amy on becoming the woman with the highest overall earnings in the show's history!"

Thanks so much, I’m honored to be in your company, and I look forward to some day watching the woman who beats us both!

.@Jeopardamy #AmySchneider Is Proud to Be @Jeopardy’s #Trans Champ. ‘But I’m a Lot of Other Things, Too!’

It’s my latest for @thedailybeast and her first interview with an out #transgender journalist:https://t.co/4R58ZQTiC5 via @thedailybeast

Amy Schneider thrilled us when she became the new Jeopardy! Champion on November 17th. She has now gone on to become the fifth highest winner during the regular season amassing a whopping $483,000 in winnings!

Jeopardy got moved to 10:30 in Oakland, and it’s date night, so I won’t be watching the episode until tomorrow, enjoy your Friday!

Amy Tweeted that she wouldn't be able to watch her last prerecorded match becuse it was being shown at 10:30 pm on Friday which is her date night. But she did have time to tweet about Lindsay Imbe, a newly out transgender woman. She simply said "Love This!" about the Anaheim Ducks organist pregame warm-up Jeopardy! rendition which she dedicated to the five-time champion.

Anywho, yes, I'm trans 🏳️‍⚧️ and bi 💖💜💙, and chose #NationalComingOutDay because I'm cliche as hell. I released a coming out album called "For Lindsay with Love" because of course I did (https://t.co/q7sNJXljjU) and wrote an article because I needed to:https://t.co/grSVlq5JrK

Posted by planet trans at 9:28 AM No comments: 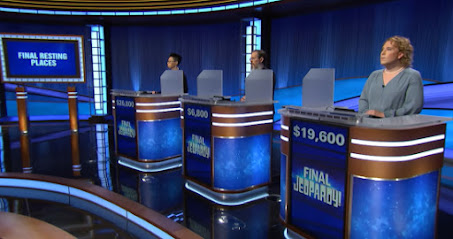 Amy Schneider, a transgender woman from Oakland, California, has just become the new Jeopardy! champion — and by a landslide, too, UPROXX reveals. The engineering manager earned the title (and a whopping $31, 600 in winnings) on November 17, putting an end to five-time champion Andrew He’s winning streak.

Ultimately, Schneider secured her big win when she was the sole contestant to correctly answer the final Jeopardy! question (“A cemetery on this island has the graves of Robert Fulton and 2 of the first 4 treasury secretaries,” “Manhattan”), demolishing the lead He had on her going into the final round.

FYI, I am not the first out trans person to appear on Jeopardy (a few friends have asked). There have been a handful before, including one, Kate Freeman, who was the first out trans champion on 12/16/20. My thanks to all of them for blazing the trail!

Schneider was quick to thank the “handful” of transgender contestants that came before her for “blazing the trail,” before also acknowledging the success of former champion Kate Freeman, who won the competition December 16, 2020 and subsequently became the first openly trans person to win the game.

YI, I am not the first out trans person to appear on Jeopardy (a few friends have asked). There have been a handful before, including one, Kate Freeman, who was the first out trans champion on 12/16/20. My thanks to all of them for blazing the trail!

Posted by planet trans at 9:18 AM No comments: