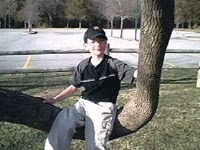 Ten year old Will Phillips, who's intelligence was recognized by skipping fourth grade, demonstrated extraordinary compassion and empathy when he recently sited a 1943 Supreme Court ruling and refused to recite the pledge of alliance. Phillips believes until all Americans are equally enjoying "liberty and Justice for all" the pledge is a empty verse.

This incredible young ally who's orientation is not gay, is enduring a homophobic backlash by his adolescent classmates and in all of places, Arkansas. The home of former Governor Huckabee recently enacted a state amendment to its constitution prohibiting adoption of children by same sex couples.

Arkansas is one of the most anti gay states and this according to Will is being proven true as the same children have over and again taunted him with phrases such as 'Gaywad'.

***Update December 3, 2009***
I have been contacted separately by Will's mother and father. Both are very grateful for the emails and phone calls in support of Will. Both are happy that Will is now focused on his school work and both are satisfied with the response from the school. It would seem at this time continued contact with the school is not necessary at this time.~kelli

Re: Protect educational integrity and protecting Will Phillips from bullying.

It has come to my attention that a substitute teacher in your district has attempted to intimidate and bully a student, Will Phillips, into doing something that was against that students better judgement and moral values. Phillips decision not to participate in reciting the pledge of allegiance was in fact, a constitutional right protected by a supreme court ruling.

The student Will Philips, has since then reported becoming the subject of homophobic bullying even though Will Phillips himself does not identify as gay.

I am asking that you require this teacher to apologize for attempting to intimidate Phillips, and that the school principal make a announcement that the school respects individual rights and the school will not allow harassment within it's walls. This would send a message to your students and teachers that bullying is not acceptable.

I wold also ask that you require your teachers to make a speical effort to be attentive and aware of bullying and to stop it immediately when it is apparent. These actions will save lives and allow your schools to pursue the American ideals that are set forth in the Pledge of Allegiance and so valued by Will Phillips.

Arkansas Times article A boy and his flag
Why Will won’t pledge
Posted by planet trans at 7:42 AM 7 comments:

Email ThisBlogThis!Share to TwitterShare to FacebookShare to Pinterest
Labels: Arkansas, Homophobia, Will Phillips

Who signed the anti-gay adoption and foster care petition in Arkansas? list linked at bottom of post

Repeal Act 1 March from Center for Artistic Revolution on Vimeo.

LITTLE ROCK, Ark. (AP) – A conservative group says it may ask Arkansas lawmakers to block the release of petition-signers’ personal information after a group posted the list of voters who had signed petitions to put adoption and foster parenting restrictions on last year’s ballot.

KnowThyNeighbor.org on April 28 posted a list of voters who signed petitions to put an initiated act banning unmarried couples from fostering or adopting children on the ballot. Voters approved the act, which took effect Jan. 1.

The Arkansas Family Council, which pushed for the act, complained that placing that list online violated the privacy of voters who signed petitions. The council says it will ask Attorney General Dustin McDaniel for an advisory opinion on whether the information can be released.

Publisher of signatures of Act a Signatures Know Thy Neighbor.org

Who signed the anti-gay adoption and foster care petition in Arkansas? Click Here to Find OUT! "NOTE: CAR DOES NOT advocate any derogatory actions based on the publication of the Act 1 petition signatures information. Our intention in publishing the list is to shine the light while promoting and furthering the dialog regarding equality in Arkansas."

By Kelli Busey
May 8, 2009
planetransgender
Posted by planet trans at 7:45 AM No comments: