Transsexuals Want Out of DADT? Get Out of the DSM! No Short Cuts! 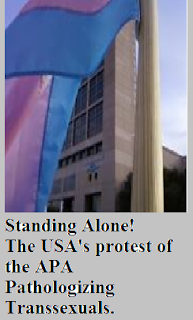 In response to the Out Serve article Transgender the New DADT there have been a number of transgender bloggers making a case that our exclusion from the DADT repeal was because gay people wanted it to happen so bad they pushed us from the table to get it done.

This time it wasn't a fault of gay peoples action or inaction we did not advance our agenda's simultaneously.

It's our fault. We have sucked at getting off our asses away from the keyboards to make ourselves visible.

Out of the DSM out of DADT! No short cut to that happening.

As founder of the growing online group Dallas Transgender Advocates and Allies I stood alone in front of the hotel the Texas APA convention despite lobbying heavily for members to attend. No one else bothered to show up. Our european community has made headlines why can't we in the states?

Gay people set the stage for the repeal of DADT by their hard work, protesting and educating which eventually led to the 1973 removal of homosexuality from the DSM. The following membership vote demanded by those opposed validated the Boards decision.

A retired Army Staff Sergeant's opinion on how to eliminate DADT for Transgender people in the service. One, We must continue laying the ground work changing society's perceptions of us.

Two, We must focus as much energy as we can getting ourselves OUT of the DSM.

Transgender people are barred from the Army by Reg. 40-501:

Which references our pathologization by the APA as the
authenticating medical journal..........

"DSM–IV
Diagnostic and Statistical Manual of Mental Disorders, Fourth Edition, Revised, American Psychiatric Association
(Cited in paras 3–30j and 4–23. This manual may be ordered at www.appi.org.)"

IF TRANSGENDER PEOPLE WANT TO SERVE IN THE MILITARY WE MUST BE REMOVED FROM THE DSM. THERE ARE NO SHORT CUTS!!!

Start by signing the Change.org petition Remove Transgender from the DSM-5

Together with Amnesty International the Danish Transgender petition against psychopathologizing has now reached 10.000 signatures.

Education and protests are seriously changing Europe with a all out effort to remove transgender people from the ICD-10.

In the states we have in comparison done nothing and the window of opportunity is quickly closing.

Find out where the APA conventions are in your state. Let them know we are alive!There is a vocal growing discontent from the APA's own membership as to the process of amending the DSM but not a mention of transgender people has been made in anything I have read!

The onus is on us! Act now!
Posted by planet trans at 9:05 AM No comments: