Dashad "Sage" Smith is still unaccounted for but that didn't stop her friends and family celebrating her 20th birthday... 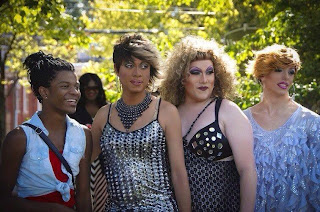 "Here's Dashad "Sage" Smith (on the left) at the Cville Pride drag show that I MC'd in September. Today is Dashad's 20th birthday. One small thing you can do today in his honor is to "like" the "Find Dashad 'Sage' Smith" page on Facebook to stay up-to-date on news about his case. And please encourage others to do the same."

One person commented: "I love this pic.... I am the queen with the longer curly hair with the mirrored bra.. I have known Sage for a while and she is in my thoughts... I cherish that moment and this pic!!!! Here's to Sage, and the hopes of a safe return!!!"

She is so full of life. This is so sad. Her grandmother's heart is breaking. If you have information on Dashad Laquinn Smith or Erik McFadden or any knowledge of this case please contact Sgt. Marc Brake at 434-970-3970 or Crimestoppers at 434-977-4000. 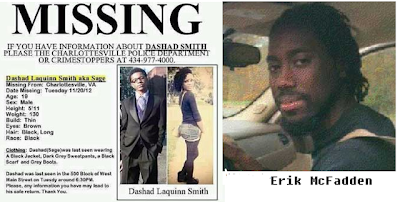 Posted by planet trans at 9:35 PM No comments:

The Charlottesville Police Department needs your assistance regarding the disappearance of
Dashad Laquinn Smith.

Smith was last seen on Tuesday, November 20th. Smith had phone contact with Erik Tyquan McFadden (Facebook picture included) on that day and then told friends he was going to meet someone on West Main Street. He was seen a short time later in the 500 block of West Main Street.

Smith has not been seen or heard from since. Erik McFadden, who at the time was living on 14th Street NW, confirmed to investigators that he did have phone contact with Smith and planned to meet him on Tuesday near the Amtrak Station on West Main Street.

McFadden stated the meeting never took place. Police have reason to believe that McFadden has now left the Charlottesville area.