When in the course of human events, it becomes necessary for one people to arise and demand the political and social rights other Citizens enjoy, a decent respect to the opinions of humanity requires that they should declare the causes that impel them such.

We hold these truths to be self-evident. Regardless of gender identity, expression and sexual orientation, all people are created Equal – that they have been endowed by their Creator with certain unalienable rights, that among these are life, liberty and the pursuit of happiness. That to secure these Rights, governments are instituted among people, deriving their just powers from the consent of the governed. That whenever any form of government becomes destructive to that end, it is the Right of the People to use the electorate process to change such government and institute new representation that will secure these rights and positively affect their safety and happiness.

Prudence, indeed, would dictate that representatives long in office and that have represented the people well should not be changed for light and transient causes. Indeed, experience has shown that people are willing to tolerate and suffer positions of their representatives as long as such evils are sufferable.

However, when such abuses and usurpations of Civil Liberties arise providing evidence to dehumanize any one group, it is the right and duty of the People to cast aside such representation in favor of new guardians that would secure the future and the liberties of all.

* The trivializing and ridiculing to the Transgender Community before the general populace.

* The casual abuse of the Transgender Community.

* Psychological warfare against the Transgender Community has been committed to affect a disassociation between the Community and the General Populace.

* Censure of the Transgender Community for expressing the desire to be treated with the same respect as other Citizens.

* Allowing the Abuse of Freedom of Speech to inspire and incite violence and maltreatment against transgender people.

* Deprivation of liberty against the Transgender Community.

* The committing of Murder against the Transgender Community with the purpose of eradicating an entire Community within the general populace.

In every stage of these oppressions, we have petitioned for redress in the most humble terms. Our petitions have been answered only by repeated injury. Any representative whose vote and actions have given concurrence with these oppressions is unfit to be a representative of a Free People. And, thus, must be removed from office using the electoral process to place New Representation in its stead.

We, therefore, the Transgender Community, appealing to the Supreme Judge of the world for the rectitude of our intentions, declare that we are a Free People – Equal with all other citizens and subservient to none. We state now and for all time that we have the right to Fair Treatment under the Law; retention of employment and housing; medical treatment as deemed necessary and prudent; to love and marry those whom we chose and do all other acts that a Free People may of right do.

And for the support of this declaration, with a firm reliance on the protection of Divine Providence, we mutually pledge to each other our live, our fortunes, our time and our sacred honor. 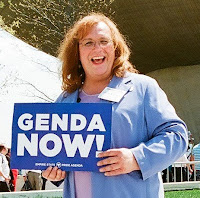 It was recently discussed online that we need a declaration of what we believe and stand for. And, just as Concord & Lexington occurred over a year before the Declaration of Independence, we, too, are at war. As long as there is a need for a Transgender Day of Remembrance to honor those recently killed in hate crimes, we are at war.

What we seek is the peaceful installation of representation that would secure the rights of the Transgender Community as well as those of all Americans.

I have taken some thoughts that Mr. Shay has shared with me and merged them with a familiar document

You may friend Shauna Marie O'Toole on facebook here
Posted by planet trans at 9:41 AM 3 comments: