Kabas said that she spoke to Brazilian Drag Queen Eula Rochard who said through a translator that Republican George Santos alias Anthony Devolder alias Anthony Zabrovsky has another nom de guerre, that of Kitara Ravache.

To be clear this article isn't a hit job. Drag artists have my highest regard. Many artists perform for charity causes undeterred by the proud boys and their ilk armed with M-15s who try to shut down these events. George Santos ran on a far-right platform paling up with the likes of Margaret Green and the GOP platform that vehemently opposes LGBTQI rights.

NEW: I just spoke by phone with Eula Rochard, a Brazilian drag queen who was friends with George Santos when he lived near Rio. She said everyone knew him as Anthony (*never* George), or by his drag name, Kitara, and confirms this photo is from a 2008 drag show at Icaraí Beach. pic.twitter.com/1MeeDR1O2O

Santos who has gone on record calling LGBTQI people 'Groomers' despite being gay himself said that reports of him performing as a drag queen were 'categorically false'.

The most recent obsession from the media claiming that I am a drag Queen or “performed” as a drag Queen is categorically false.

The media continues to make outrageous claims about my life while I am working to deliver results.

I will not be distracted nor fazed by this.

Posted by planet trans at 5:50 AM No comments: 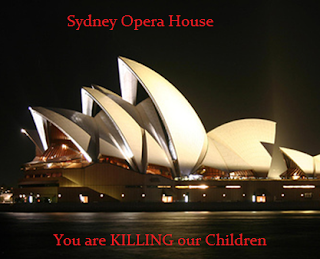 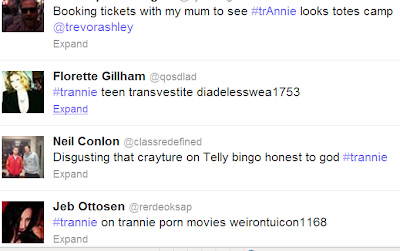 You wouldn't be contributing to the hate that kills.
Posted by planet trans at 9:10 AM No comments: 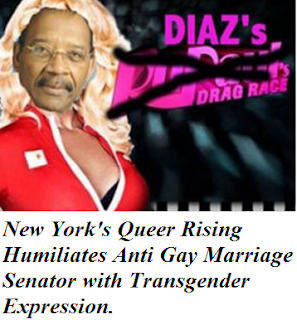 Kat over at Enda Blog is righteously "fucking mad" that New York gay's are continuing to place Marriage equality over GENDA.

I couldn't agree more with Kat on that count but what makes me really "fucking mad" is a that queer rising, a New York Gay advocacy organization is using Rupaul's misappropriated brand trying to embarrass their opponents with MY transgender expression.

Queer Rising offended that Senator Diaz is holding a anti gay marriage rally the same day will be on the Aids Walk route taking pictures of the Senator in drag with participants for a dollar.

Ok, this is not right you're thinking, but maybe Queer Rising has a history of transgender activism and being populated by trans people this transgression might not seem as offensive. Viewing the video of past actions I see no obviously trans peeps so we'll dig a little deeper, there still might be some trans in the woodpile.

Well, Queer Rising's Facebook page and web page listing past actions doesn't have anything in support of the most vulnerable of our community, inner city transgender people. Neither does Queer Rising cofounder Natasha Dillon Twitter account nor does Queer Rising..

Queer Rising WHO THE FUCK DO YOU THINK YOU ARE? TAKE THE "T" OUT OF YOUR NAME! you have done nothing to earn it

So, I painted myself into a corner you think defending RuPaul of all people!

Number 1. RuPaul is a transphobic cisgender gay pig who's monetarily capitalizing on the transgender expression which tragically simultaneously assimilates our expression. (we got him, like it or not)

Number 2. That said, drag does fall under the transgender umbrella as much as I don't like it and you're using it to denigrate our existence is an attack on our physical welfare


I got a better idea! Why don't we place your senatorial opponents on top of your gay fist 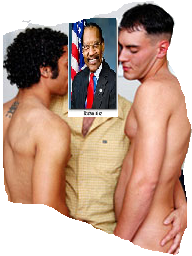 and humiliate him with the idea HE MIGHT BE GAY? *GASP* Just leave transgender expression and identity alone. I'll tell you why.

You are gay and lesbian misogynist and did not want to denigrate the gay experience. Because transgender people are easily accessible less respected minority EVERYONE can laugh at, one that gay people feel they have some claim to. YOU USED US!

We are not less than you, damn it.

Update of sorts. Its still a day before the walk but I have had two phone conversations with Natasha Dillion. She told me during those talks the reason Queer Rising has no history of transgender advocacy is because no transgender people have attended their meetings.

According to Natasha" We vote on advocacy ideas from our members but since we have had no transgender members there have been no trans events" I really suspected as much. When she was questioned about who suggested using drag to humiliate the Senator Ms. Dillion told me "We have a couple drag queen members, some who have been arrested with us and they suggested the idea". Ms. Dillion did say that their drag members did not live full time.

In this mornings twitter conversation Ms Dillion responded positively to my list of blogs I asked her to read with this mention:

Again I ask that DRAG, a part of our culture NOT be used to humiliate and degrade our adversaries. Actions like that send a message to the transgender communities foes that not only are we less than they but less than gay.

Posted by planet trans at 6:35 PM No comments:

Now this Drag Queen has Class! Apparently 30,000 people think so too! Ryan Allen AKA Reann Ballslee when she performs in Washington DC area celebrates after being elected Homecoming Queen by the Class of 2009 at George Mason University!
According to the AP release George Mason picks drag queen as homecoming queen Ms. Ballslee says "Reann is very sassy, very silly. She's an entertainer throughout. She's not afraid to do a high kick if that's what it takes," Allen said. "She's got a little camp but is not as campy as some queens."