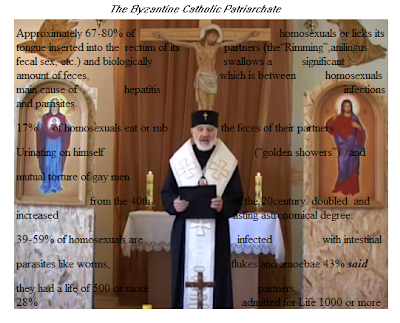 The Ukrainian Byzantine Catholic Patriarchate, the leader of the ultra conservative Ukrainian Orthodox Greek Catholic Church has attacked the Prague Pride with a open letter to the people of the Czech republic.
.

From Prague PRIDE – "you’d think it would be a “piece of cake” but all sorts of underlying stories are emerging and according to Czeslaw Prague PRIDE’s director, the evidence is that attitudes to LGBT people are getting worse in the Czech Republic. And with the office of the Czech President joining in, Petr Hajek used language such as “homsexuals are deviants”and when asked to distance himself the right-wing Czech Presdient Vaclav Klaus chose to endorse them."

Something you CAN do: write a blank email to the patriarchate and FILL their inbox

Suggested Title: “Father forgive them for they know not what they do.” Luke 23:34

Passed through the press report that the Vice Chancellor Peter Hajek termed the forthcoming Prague-pride. “Coercive means deviants”. This boldly expresses the truth. Mayor Svoboda and certain CSSD party members and VV pressured the President to distance himself from his true statement of his Vice-Chancellor. Even require a public apology. Everyone knows that gay pride is a coercive means, and in all countries of the world. Moreover, everyone knows that during these marches is a very undignified expressions perversion (deviance).

- Homosexuals are more than 50% of known AIDS cases in the United States. (Ed: but overwhelmingly heterosexual around the world, including in Ukraine and Russia)

- Homosexuals are involved in the disproportionate number of hepatitis cases: 70-80% in San

Francisco, 66% in New York, 56% in Toronto, 42% in Montreal. (Editor Sources? Incidences in other populations?)

- 39-59% of homosexuals are infected with intestinal parasites like worms, flukes and amoebae (Editor and the figure for heterosexuals would be?)

- 17% of homosexuals eating or rubs the feces of their partners. (Editor: Reputable source? Does this include Female homosexuals?)

- By 1992, gay bondage known as a disease and only under duresswas removed from the WHO list of diseases.

(Editor: FANTASY the accurate description is that the World Health Organisation (WHO) removed “homosexuality” from the list of mental disorders, the wording is very specific and it definitely was NOT “gay bondage” that assertion is pure fantasy)

(Editor: we’ll contact him and see what he really said)

“Homosexuals in large cities contribute to half of all murders.” (Editor: Reputable link?)

- Homosexuals is attributed to 50% of suicides. (Editor: Reputable link?)

- 37% of gay sado-masochism runs, resulting in many deaths. (Editor: a full description of the statistic?)

- The homosexual is 100 times more likely to be murdered (usually by another homosexual) than the average person. (Editor: Reputable source?)

- About 50% of women on death row in the U.S. are lesbians. (Editor: Reputable source?)

- 33% of homosexuals are pedophiles. Their motto is “sex before eight years THAN LATE. ”

(Editor: men who prey on children below the age of 16 are overwhelmingly heterosexual and include a significant number of Catholic priests)

The fact that Mr. Hajek called this perverse “lifestyle” only “deviation” is not an insult or exaggeration. Czech parents do not want their children to school and przněny převychovávány on homosexuals to get AIDS and die as suicides. Mr. Hajek and not with the President apologizing for what! Conversely, the citizens of Prague and the whole nation is obliged to apologize to the Mayor Liberty and those members of political parties and VV CSSD, who betrayed the truth and democracy and demoralize nation. Protecting the nation from homosexualismem is good not only for society but also for themselves homosexuals. It is a known fact that homosexuals are oppressed minority.

Practice proves that a small handful of whole society discriminates against homosexuals, changing laws and raises homodiktaturu. Brandishing the phrases about freedom of speech and democracy, but both exploits and destroys! Gender-gay ideology introduces new thinking, based on irealitě and loss of reason and discernment. Woman which asserts that man must be under the new laws in the Republic considered a man. This ideology Czech state makes Gotham. Shame on the church hierarchy in the CR, nor to defend the laws of God or human rights! This hierarchy proved zrádnická structure of God and the nation. The Word of God calls homosexuality a heavy sin and an abomination. An example, the annihilation of Sodom and Gomorrah by fire. Byzantine Catholic Patriarchate calls on all religious leaders, especially Catholics, that even with his faithful have taken a clear and biblical position on homosexualismu. Invites them to at least additionally oppose Prague-pride and support the President and his Vice-Chancellor in their position of defending the moral and spiritual values ​​of the nation.

(Editor: For an alternative look at the Bible’s attitude to “homosexuality” please read Reluctant Journey by a heterosexual Methodist priest who is also a Biblical expert.)

- Parliament of the Republic

- Representatives of the Church