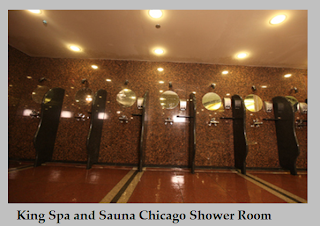 A Chicago man has filed a discrimination complaint against the  King Spa and Sauna for denying him the use of the men's shower, pictured right. According to the Windy City Times Levi Pine felt degraded after the manager approached him while he was naked asking to speak with him.


The manager, who identified himself as John but declined to provide a last name to Windy City Times, questioned Pine about his gender. Pine told John that he was transgender, and John said he could provide Pine with a private shower.

Pine said he did not want a private shower and that he could use the same facilities used by other customers. But, John said, other customers had complained.

So I was curious, are youth allowed in the King Spa and Sauna so I called the Chicago facility.

The service representative told me children under 12 are allowed as long as they are accompanied by an adult of the same sex. Children over 12 after being admitted with an adult are allowed unrestricted access to the faculty.

"I shouldn't have to be sequestered into a private area," Pine later told Windy City Times. "Just because some people who go there are uncomfortable with my body, shouldn't change what I have to do and shouldn't change my rights as a customer."

The nity gritty. Transgender men have become used to identifying there Sexual Reassignment Surgery as a breast reduction and reconstruction and in addition to affects of hormone replacement therapy most trans men 'pass' easily. Until you drop you're drawers then passing becomes problematic.

The lone commenter on the Windy City Times, Amber, made a argument for his rights to use public accommodations as did John Knight, LGBT project attorney for the American Civil Liberties Union of Illinois and my good friend Attorney Joanie Rae Wimmer. 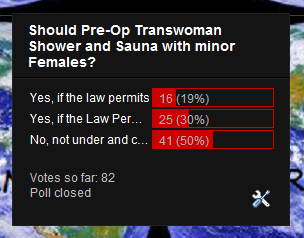 Amber makes a case for blind justice for transgender rights but in this case I think the blinders should come off.

Pine probably has a valid case under law but..
My 2cents.....

Mr. Pine is ether ignorant about the Spa's policy on admitting children, caught up in the cause or he's just uncaring.
I feel we have a moral responsibility as do the vast majority of those previously polled regarding nudity in public accommodations with to respect children.

It's not optional, it's not a case of discrimination regardless of consequences, its our duty as citizens if a person has not had bottom surgery, full nudity must be considered a condition reserved for consenting adults. If children are present or the possibility exists a child could enter the room under those conditions, it's not just wrong, it's immoral.