When you click the link to Richard Littlejohn's Mail Online now deleted article crucifying Lucy Meadows...... it still appears momentarily like a ghost haunting them from Google's cached graveyard.

I was able to snip it before it fades away completely.

While it's not clear at this moment whether Lucy Meadows committed suicide or whether her death could be attributed directly to the toxicity of this article a number of things are certain. 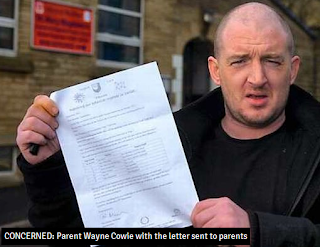 Her transition would have been a whole lot better if the schools letter to the parents, however well intended, hadn't misgendered her. This letter alone probably wasn't the sole reason Mr Cowie and other transphobic parents contacted the Mail Online about this, but it certainly did not help.

The Mail online removed this article March 21st two days following Miss Meadows death which in my book is a self incriminating admission of culpability.

There was a level of acceptance by students for Lucy Meadows who by all appearances was a lovely caring soul regardless of her gender expression.

Zinna Jones read the article before it was taken down and reports it essentially told her to go away. This is devastating for someone who cares for her students as Miss Jones undoubtedly did.

There is a online petition: Daily Mail: Fire Richard Littlejohn for victimizing Lucy Meadows, leading to her possible suicide.

Note to the Fail Online. Your turn is coming. You can't run, delete or hide. We don't forget or forgive. Anonmyous Open Letter To Richard Littlejohn of the U.K. Daily Mail:


I am writing this to be the voice of Lucy Meadows. Words are not enough for me to describe the sadness and horror I feel on behalf of Ms. Lucy Meadows. As someone who was bullied for coming from an LGBT home, and for having obviously less than male emotions and less than male macho behavior, I know the effects of being bullied to the point of suicide. I almost took my own life back in 1993. I unknowingly tried to overdose on an anti-anxiety med that I became addicted to in my pain and deep depression of that time in my life. I was only 15 years old. I use the word "unknowingly" because I was in such an overwhelmed, separated, otherworldly mental state that was dark, lonely, beyond painful, and truly scary. I was lucky enough to somehow know that I needed emergency medical help. I am still here because I sought help. Lucy Meadows deserved to life her life with encouragement, support, dignity, respect, and she deserved to be treated like a valuable human being.

Richard Littlejohn has done more than just step over the line, he has used his position to commit pre-meditated murder, even if British law doesn't see it that way. Richard Littlejohn, YOU are worse than the lowest and most worthless excuse for a human being! YOU used your position to gain ratings and profit at the expense of the life of another person.

What's real means nothing to you, Dick Littlejohn! The disgusting, skin deep, inhumane mind and existence you live in is worse than that of any other evil that can be referred to. EVIL is too nice to call you, you are far worse than evil, you are a huge zero! Your existence here on this earth never mattered, and will never matter. I am speaking, Dick Littlejohn, as the voice of the person who can never speak for herself, for the voice you stole without any sort of legal or moral justification. Asking who the hell you think you are to do what you did and to have done it at the cost of sending someone to their untimely grave is an opportunity I am NOT going to give you!

YOu didn't give Lucy Meadows ONE CHANCE to live a decent life, YOU did NOT give Lucy Meadows mercy or understanding, YOU are guilty of the worst crime anyone could ever have committed! I AM NOT here to give you a chance to have a voice or a chance to explain, because no one anywhere wants to hear it. YOU DON'T GET A CHANCE to defend yourself! On behalf of the life that was taken, I am reserving that right to take YOUR voice from you in exchange, and what I mean by that is to tell you that you should not even attempt to speak. You should wallow in the same shame, inhumane indignity, and your life should literally become worse than the hell you heaped upon Lucy!

Dick Littlejohn, you stand publicly convicted by public morals and everyday standards of human living. You stand convicted outside the realm of a legal court of law for the crime of being a predator who singles out women whose only crime is to correct their bodies to match their brain. A transgender person live with a very real medical problem for which the only treatment is to transition into the proper physical body and social mode of living. YOU took that HUMAN RIGHT and MEDICAL OPTION away from Lucy, and it led to her death!

Shame is too light of a word to use here for you. On behalf of thee educated, civilized, compassionate, understanding, loving people of the world: RESIGN YOUR POSITION IMMEDIATELY and PERMANENTLY RESIGN FROM EVER AGAIN BEING A MEMBER OF THE MEDIA! After that, YOU CAN GO LIVE A LONELY, SOLITARY, PAINFUL LIFE OF INTERNAL TORTURE UNTIL THE MOMENT OF YOUR OWN NATURAL DEATH! When the day of your death comes forth, I hope you are greeted by Lucy Meadows, and I hope you are tormented by her in the exact way you tormented her! After that, I hope she is granted the power to send you straight to hell if there is such a place!

Posted by planet trans at 12:21 AM No comments: