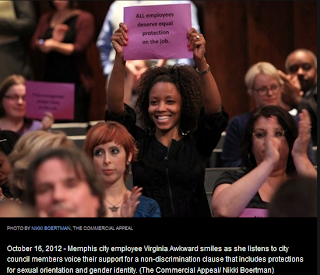 As expected Memphis passed the amendment to it's cities employees non discrimination policy to include sexual orientation but totally unexpected was the reinsertion of gender ID including trans people as well!

Upon learning that the amendment had been rewritten to exclude transsexuals behind closed doors  at the last moment before the vote I began a petition asking Memphis to protect Trans people. Four hundred people signed sending a email message each time to every council member. I will close that petition now and thank the Council for there vote.

To all those of us who signed the petition, we can only speculate as to what effect our effort had but since we were the only petition to address trans exclusion specifically, and mainstream media  made absolutely no mention of our being written out, I can assure you, we helped.


"From an activist friend of mine in Memphis: Memphis City Council passes non-discrimination ordinance and resolution prohibiting discrimination based on sexual orientation and gender identity!(though the title is wrong)"

From the Commercial Appeal "Memphis approves protections against discrimination for sexual orientation":

The Memphis City Council on Tuesday approved a nondiscrimination ordinance that includes workplace protections for sexual orientation and gender identity, ending a debate that began in 2010.

"City of Memphis employees will go to bed tonight and wake up in the morning to hear the news that their hard work will be respected and their ability to contribute to their community will be preserved," said Jonathan Cole, vice president of the Tennessee Equality Project, one of the backers of the legislation. "It's a new day in Memphis, Tennessee."
There's at least one more person I must mention. Thank you Jonathan Cole, I know our brief relationship was contentious at times but given the situation I think we did a good job to keep everything in perspective. Thank you for your patience.

Council members Bill Boyd, Joe Brown, Bill Morrison and Kemp Conrad you all vote against it. I have faith as your city's trans people become empowered by your new ordinance and begin living authentically you will get to know who they truly are and will ask yourself why you hadn't voted for this measure in the first place.

Thank you Memphis City Council for doing the right thing.