Yes NG Blog: It can be a Ignorant Arrogant Misogynistic Gay and Lesbian world 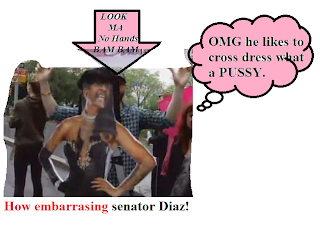 A couple of days ago Nelson over at NG Blog inserted himself into a twitter conversation I was having. I was communicating with Queer Rising founder Natasha Dillon trying to educate her about the wrongness of their planed event using transgender expression to humiliate Senator Diaz during the NYC Aids Walk.

Well they did it anyways.

Nelson then strenuously interjected his opposition to my advocacy at a very critical junction. Its cool twitter is a free for all but......

Nelson, I was not alone objecting to this. Most of the gay, lesbian and transgender community felt it was wrong with one trans member Ashley Love, quiting Queer Rising.

It is exploitative and marginalizing of a larger minority to use a small component of its community as a tool in a debasing manner to embarrass someone.
I feel it's indicative of the gay communities elephant in the room, misogynistic behaviour towards womankind. Seriously, how many protests by cisgender men of cisgender woman entail holding up a misgendered portrait of their opponent???

Nelson writes on NG Blog trans people should feel privileged to be used like that cardboard cutout.

Nelson, drag is part of the transgender expression, or is according to gay people whenever I try and distance myself from gay men mocking womankind.

Nelson, please take a moment and educate yourself. When I first became upset with Israel Luna's infamous TO#WK and found myself wanting for a publication explaining gay and lesbian misogynist transphobia behaviour I stumbled across the publication GLBTQ Social Sciences and this paragraph:

Yes Nelson it is a mad, mad, mad, mad, world if you let your innate misogyny run wild because it knows no boundaries. Neither does racial hate. Neither does angst towards someone different from ourselves. Its naturally occurring but when confronted from the inside it can be defeated. Then its not so mad.

NGblog: Judy Shepard on Rachel Maddow/MSNBC 9pm EST
I want to watch this. Foxx(R) NC tirade against naming human rigts bills "Mathew Shepard" in honor of Judy's son has brought new energy that helped to pass the House version HR(1913.) It is now in the Senate Judiciary committee waiting recommendations as S.909 with a final destination at the White House where President Obama promised to sign it.
Thanks NG Blog
Posted by planet trans at 7:55 PM No comments: