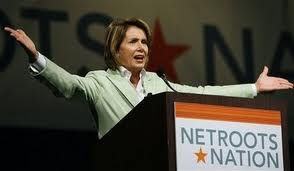 Nancy Pelosi confirmed the reason ENDA remains in committee by attempting to mislead us as to whom is actually denying us workplace equality and why.

Speaker Nancy Pelosi: "ENDA has been something that has been part of my being (?) since I went to the Congress. And then some years later, around 16 years ago, we finally had legislation that we could rally around. This is an absolute priority, not only for me personally, but for our House Democratic Caucus."

"Under the leadership of George Miller (D-CA), the chairman of the Education and Labor Committee which has primary jurisdiction, we have been working very hard to try to iron out some of the – to have some clarity of language that could dispel some opposition. This is something that has to be done. It’s so long overdue. It’s almost embarrassing to have to have to pass a bill to end discrimination in the workplace."

Moderator: Who’s blocking the passage of ENDA and whom should the netroots target?

Pelosi: Well, I think I would target in a positive way (audience rumbles) – this is America – show your appreciation for those who are with you, with us – encourage them to be not only a vote but a leader on the issue – persuader, the peer pressure that is there. Because I don’t think – I think

that some of the opposition comes from those perhaps in the work, um – in the business community who may not understand the – how this can be practically accomplished. We think it can. I think that should be the least of it, when we’re talking about ending discrimination in our country.

Yes Speaker Pelosi it is embarrassing that you should offer up such a lame excuse and worst, try to offer up false hope that DADT might be repealed before the years end to placate the majority of the LGBT population. Even more embarrassing is your sacrificing of our minority on account of your worthless democrats.

But times have surely changed Speaker Pelosi. The entire LGBT community is fully committed to equality for each and everyone so a divide and conquer is a major fail.

We also full understand who exactly and why ENDA has failed to move out of committee and it's not because of business concerns. The democrats have once again show the spineless ignorant selves and bent to religious demagogues who have used there political clout to once again insure transgender people will not pee in peace.

The 'ENDA problem' is the legislators inability to wordsmith ENDA so that employers would be enabled to discriminate in a way that would not cause civil upheaval from the entire LGBT population. Remember Speaker we are one in purpose now.

Speaker Pelosi, we demand full equality THIS session. To do otherwise would truly be embarrassing for you.
Posted by planet trans at 6:14 PM 2 comments: