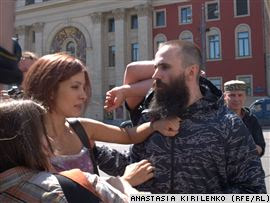 Another Novaya Gazeta reporter attacked by Russian authorities. Elena Kostyuchenko was beaten and hospitalized at the 2011 Gay Pride.

According to TV reporter Olga Bakushinskii's personal Journal, a eye witness saw the police and 'counter demonstrators' act comradely after arriving on the same bus.

Just don't bother searching for news of the Pride on the Russian TV. It's mission states it does not report on controversial topics. Just as the Kremlin demands.

In 2009 I wrote a commemorative about continuing assassination of the reporters of the last remaining Russian free press newspaper, the Novaya Gazeta. In 2009 it was a fluke I even saw the Russian article. There were very few news reports from Russia.

Times have changed and we remain unafraid. But reporters still remain the target of the Russian governments hate. The difference now is we do not have to wait to mourn to celebrate a life of someone who dares to be faithful to humanity. 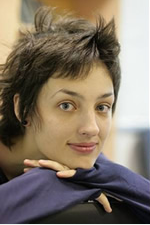 Meet Elena Kostyuchenko,peace activist and reporter . Elena who recently announced her love for Anna Annenkov writes in her Journal why she wanted to attend the Pride Parade. For this she suffered a concussion.

I hope Putin reads this. I would be honored if planetransgender would companion Novaya Gazeta as the most hated by the Kremlin. Hey Putin, got balls? Come take a shot at me. But leave your thugs at home. Just you and I Putin, behind the shed.

Please sign the LETTER TO (Russian)POWER: GIVE EQUAL ACCESS TO ELECTIONS FOR ALL POLITICAL FORCES
Posted by planet trans at 9:53 AM No comments: