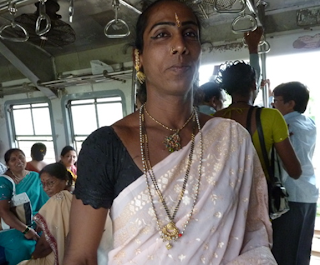 India's Eunuchs responding to the recent Bus Gang Rape take the battle against the country's rape culture to the streets.

In what could only be described as cast breaking advocacy the 'Society for People’s Awareness, Care and Empowerment’ has posted  this number 011-65647105 for victims of sexual harassment and rape to call.

They will then send a contingent of transgender people or 'Chhakka Squad’ to the perpetrators house perform skits and sing songs making this offense public knowledge.

This Incredibly powerful transgender advocacy makes me want to move to Delhi. Proud of you sisters!

Source Hindustan Times "Moved by the gruesome rape of a 23-year-old in a moving bus, eunuchs— a section of society ridiculed and abhorred by the majority, have formed a force that sarcastically calls itself ‘Chhakka Squad’. Its motive: to counter sexual harassment against women in the Capital. With brooms, jutis and play cards with hard hitting slogans, they plan to go from one locality to another and stage skits and sing songs to publicly ‘embarrass’ those who sexually harass women."

What makes this such powerful advocacy? Transgender people in India are playing it forward despite belonging to one of the country most discriminated cast.

"The 900 eunuchs, who are member of SPACE — ‘Society for People’s Awareness, Care & Empowerment’ — a human rights organisation, have also set up a helpline. Women can call on 011-65647105 to register their complaints. “If we get to know that a guy has sexually offended a girl, we will stage a dharna in front of that person’s house, follow him wherever he goes and force him to apologise,” says 24-year-old Sonia, a member of the hijra community."