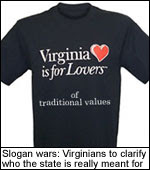 The student council and 62 campus groups stood up to the Virginia Attorney General and passed a resolution urging the legislature to amend the states non discrimination policy to include gender identity/expression and sexual orientation.

"Student Council unanimously passed a resolution yesterday night to affirm its support for a fully inclusive non-discrimination policy and to urge the Board of Visitors, the Virginia General Assembly and U.S. Congress to pass legislation supporting protections “against discrimination in local, state, and federal employment based on sexual orientation, gender identity, and gender expression.”

The resolution comes on the one year anniversary of a hate crime against a gay student and in response to the VA AG who has campaigned stridently against LGBT rights in Virgina.

"Virginian Republican Attorney General Ken Cuccinelli has written a letter to all of the state's public colleges encouraging them to abolish policies that prohibit discrimination of gays and lesbians."

A paragraph from the VA AG Ken Cussinelli's anti equality letter which so inflamed students passions;

"It is my advice that the law and public policy of the Commonwealth of Virginia prohibit a college or university from including 'sexual orientation,' 'gender identity,' 'gender expression,' or like classification as a protected class within its non-discrimination policy absent specific authorization from the General Assembly."

On March 11 2010 the Virgina Governor did a 180 degree about face, rescinding his previous executive order removing protections from LGBT state workers and rescinding the AG's letter recommending removal of protections. Many saw this as a pragmatic political maneuver since it does not mandate state reporting or enforcement.

"Mr. Cuccinelli ruled that only the state legislature can extend such protections. McDonnell says he agrees with Cuccinelli’s basic legal interpretation, but as he rescinded Cucinelli's letter Wednesday he acknowledged that an executive directive can, in fact, extend some rights to workers and is symbolically important. (So far, Virginia's Republican-dominated legislature has not passed a law extending workplace rights to gays.)"

Republican Governor McDonnel's letter reaffirming his commitment to an inclusive nondiscrimination policy included this paragraph and is seen by conservatives as a bellwether for republican policy as most are similarly beset by overwhelming fiscal problems and a population demanding equality;

"We will not tolerate discrimination based on sexual orientation or any other basis that's outlawed under state or federal law or the Constitution, and if it is reported, then I will take action, from reprimand to termination, to make sure that does not occur," McDonnell said Wednesday.

Posted by planet trans at 11:44 AM No comments: