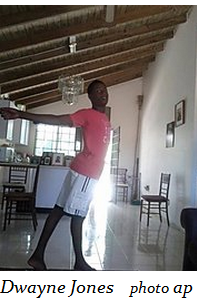 Truly heartbreaking to die alone, rejected by family, homeless, tortured for hours for expressing ones true gender, but that's how Dwayne's life ended after being outed at a dance. Heartbreaking that not one of the 300 people at that dance would be caring enough to identify her attackers.

There has been controversy in the social sphere if Dwayne was transgender. If I knew I was about to be beaten for my gender expression on that Montego morning my last words as a trans woman would have been the same as hers ergo I use female pronouns in reference to Dwayne.


Dwayne Jones was relentlessly teased in high school for being effeminate until he dropped out. His father not only kicked him out of the house at the age of 14 but also helped jeering neighbors push the youngster from the rough Jamaican slum where he grew up.

By age 16, the teenager was dead — beaten, stabbed, shot and run over by a car when he showed up at a street party dressed as a woman. His mistake: confiding to a friend that he was attending a "straight" party as a girl for the first time in his life.

"When I saw Dwayne's body, I started shaking and crying," said Khloe, one of three transgendered friends who shared a derelict house with the teenager in the hills above the north coast city of Montego Bay. Like many transgenders and gays in Jamaica, Khloe wouldn't give a full name out of fear.

Caribbean-based reporter and editor David McFadden who authored the AP article lives in Jamaica has first hand knowledge of the transphobic and homophobic atmosphere and was allowed interviews with Dwayne's housemates who miss her dearly.


Dwayne was the center of attraction shortly after arriving in a taxi at 2 a.m. with his two 23-year-old housemates, Khloe and Keke. Dwayne's expert dance moves, long legs and high cheekbones quickly made him the one that the guys were trying to get next to.

Dwayne had been very careful not to tell anyone about attending this dance in her authentic gender. No one knew except a girl from her church who she confided in who in turn outed her.


Minutes later, according to Khloe and Keke, the girl's male friends gathered around Dwayne in the dimly-lit street asking: "Are you a woman or a man?" One man waved a lighter's flame near Dwayne's sneakers, asking whether a girl could have such big feet. 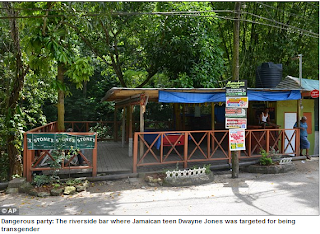 Then, his friends said, another man grabbed a lantern from an outdoor bar and walked over to Dwayne, shining the bright light over him from head to toe. "It's a man," he concluded, while the others hissed "batty boy" and other anti-gay epithets.


Khloe says she tried to steer him away from the crowd, whispering in Dwayne's ear: "Walk with me, walk with me." But Dwayne pulled away, loudly insisting to partygoers that he was a girl. When someone behind him snapped his bra strap, the teen panicked and raced down the street.

But he couldn't run fast enough to escape the mob.

The teenager was viciously assaulted and apparently half-conscious for some two hours before another sustained attack finished him off, according to Khloe, who was also beaten and nearly raped. She hid in a nearby church and then the surrounding woods, unable to call for help because she didn't have her cellphone.

Dwayne's father in the Montego Bay slum of North Gully didn't want to talk about his son's life or death. The teen's family wouldn't even claim the body, according to Dwayne's friends.

"I'll be cooking in the kitchen and I'll say, 'Dwayne, you hungry?' or something like that," said Keke while sitting on the old mattress in her bedroom, flinching as neighborhood dogs barked outside. "We just miss him all the time. Sometimes I think I see him." 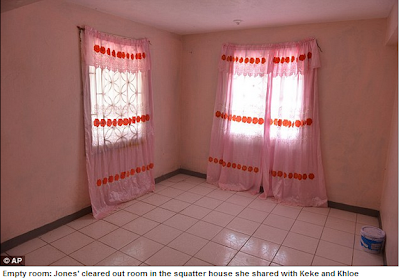 Dwayne's room is empty except for pink window curtains decorated with roses, his favorite flower.

R.I.P Dwayne. Your LGBT community will hold you dear and will give you your final resting place in our hearts.

Posted by planet trans at 11:01 AM No comments:

The slaughter of Duanna Johnson will not stop Transgender Activists from continuing to press for JUSTICE in Memphis. Be it "police" or "Murdering Thugs" we will find out who murdered Duanna Johnson.

Please click title for link to original post and emotional video with Angie's famly.
Thanks to PageOneQ for this well writen article and keeping us up on this tragady.
Posted by planet trans at 10:18 PM No comments: