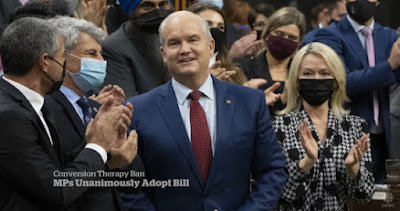 Canada's House of Commons unanimously agreed to pass Bill C-4, the legislation to ban conversion therapy, through all stages without study or amendment after a Conservative motion, making it the first bill to pass the House in the 44th Parliament.

OTTAWA -(CP24 Reports) Canada's House of Commons erupted into a scene of cheers and cross-party hugs Wednesday as MPs unanimously adopted a motion presented by a Conservative MP to fast-track the passage of a Liberal government bill banning conversion therapy for LGBTQ Canadians.

That legislation, introduced earlier in the week, will now proceed to the Senate, as no MP spoke out against the move to skip the routine legislative debate.

The lightning-fast speed at which it unfolded was initiated in the House by Conservative justice critic Rob Moore, who presented the motion during Wednesday's sitting after the Tory caucus met earlier in the day.

conversion therapy has been criminalized in canada via the passing of bill c-4.

i wish all canadian TERFs and gender criticals a happy “go to jail you bigots” pic.twitter.com/x2V2yUzzs2

Posted by planet trans at 7:41 AM No comments: