MS Republican Calls For the execution of Transgender "groomers"

Robert Foster a former GOP state representative and gubernatorial candidate from Missippi has called for the execution of thousands of trans affirming parents, doctors, politicians, lawyers, and advocates.

Why shoot thousands, perhaps hundreds of thousands of innocent people?

Foster explained in a later tweet that it would be more cost-effective to shoot 'enablers' as opposed to gassing or pushing people out of airborne aircraft. Foster is an expert on murder as he is the author of Missippi's current death penalty law. 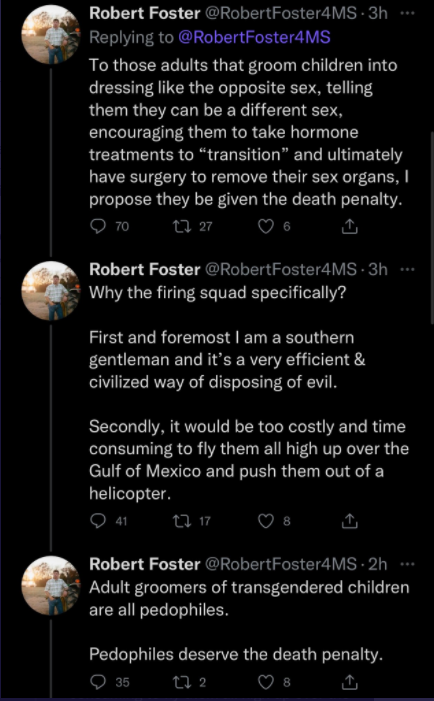 This fucking lunatic is an elected official. Twitter doesn’t seem to have a problem with his tweets baselessly calling people pedophiles and calling for them to be put to death, though. pic.twitter.com/zxxzYuwJRg 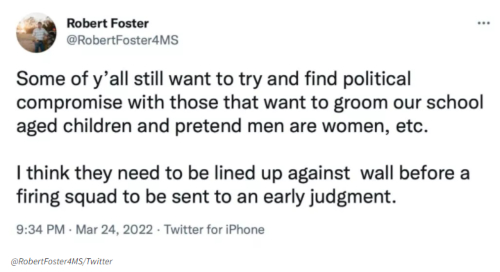 Foster, who runs Cedar Hill Farm, an agritourism business in DeSoto County, Miss., served as a state representative from 2016 until 2020, where he authored the state’s current death penalty law in 2017, allowing for executions by gas chamber, electrocution and firing squad. He placed third in the 2019 Republican primary for governor after making national headlines for refusing to allow women journalists to ride along in his truck on the campaign trail despite allowing male journalists to do so.

Despite winning less than 18% of the GOP primary vote, Foster’s farm venue has become a prime destination for Republicans since 2019, with GOP officials like U.S. Sen. Cindy Hyde-Smith, U.S. House Rep. Trent Kelly and House Speaker Philip Gunn attending fundraisers and other events on the property.

I see this really set some of the wackos off, let me elaborate for you.

First, that tweet says nothing about shooting or killing transgendered people. It clearly says groomers.

Foster can't explain further because Twitter removed his tweets calling for the execution of parents, doctors, transgender advocates, and allies.

No.
But, I’m proud to have been involved in your suspension.#TransRightsAreHumanRights pic.twitter.com/LD93MfpOim 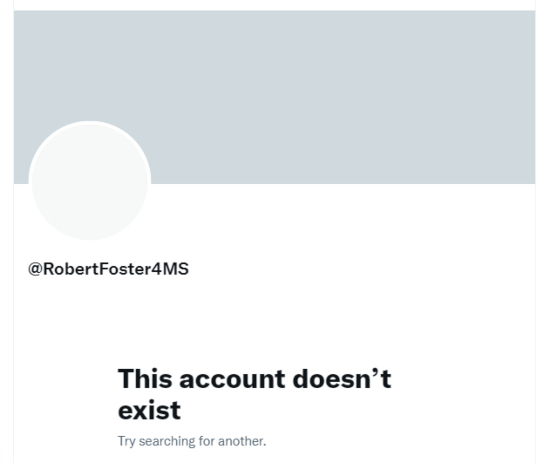 Posted by planet trans at 5:42 PM No comments: