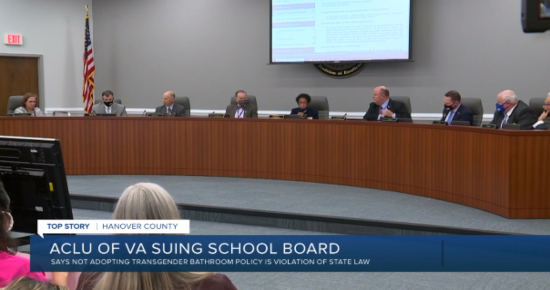 The ACLU of Virginia has filed a lawsuit against the Hanover County School Board over its vote last month to not adopt a transgender bathroom policy.

The Hanover School Board willfully broke the law by voting to deny transgender students protections as required by state law.

The lawsuit, CBS 6 wtvr reports was filed on behalf of five parents with transgender students in Hanover Schools, alleged the Hanover School Board broke two laws at its November 9 meeting. It was at that meeting when the board voted 4-to-3 to not adopt a policy to allow transgender students to use the bathroom of the gender with which they identify.

In March 2020, the General Assembly passed a law mandating that all public schools in Virginia adopt policies ensuring appropriate access to bathrooms and facilities in line with a student’s gender identity, among other protections for transgender students. The Virginia Department of Education (VDOE) created model policies, including use of facilities, correct pronoun and name usage, privacy and security, dress codes, and more.

All school boards were required to adopt consistent policies by the beginning of the 2021-22 school year. In a public consultation during the November 9, 2021 school board meeting, the board’s own attorney advised them of the state mandate and standing case law from Grimm v. Gloucester County School Board, yet the school board willfully voted to violate the law.

“The Hanover County School Board is denying transgender students a safe learning environment, even after understanding the risks it poses to the health and well-being of students, not to mention the legal liability that comes with breaking the law,” said Eden Heilman, legal director of the ACLU of Virginia. “There’s no ambiguity in the school board’s vote. The board members knew the board’s actions were discriminatory and outside the law, but they did it anyway. These students are compelled to attend school in a school system that refuses to protect them, and each weekday morning, our plaintiffs say goodbye to their kids while fearing for their safety. No parent should be forced into that position.”

No transgender students should be afraid of going to school because their school system refuses to protect them.

No parents should have to fear for their kids’ safety after they drop them off at schools.

You can read our press release here.https://t.co/oktfsBlle5

Posted by planet trans at 8:01 AM No comments:

Gloucester School Board to pay 1.3 Million to Gavin Grimm's Attorneys


The ACLU announced Thursday that it will pay 1.3 million dollars attorney fees to end a landmark six-year-long transgender discrimination case.

It began in 2015 when Gavin Grimm, then a high school student was denied the use of the boy's bathroom despite having used it trouble-free at his school for seven weeks.

The Glouster School Board instituted anti-trans rules that required Grimm to use the nurse's single-stall bathroom.

The School board fought Grimm all the way to the Supreme Court which declined to take his case.

“We are glad that this long litigation is finally over and that Gavin has been fully vindicated by the courts, but it should not have taken over six years of expensive litigation to get to this point,” said Josh Block, senior staff attorney with the ACLU LGBTQ & HIV Project. “After a year in which state legislatures have introduced an unprecedented number of bills targeting trans youth, we hope that the fee award will give other school boards and lawmakers pause before they use discrimination to score political points.”

“Rather than allow a child equal access to a safe school environment, the Gloucester School Board decided to fight this child for five years in a costly legal battle that they lost,” said Gavin Grimm. “I hope that this outcome sends a strong message to other school systems, that discrimination is an expensive losing battle.”

“The resolution in Gavin’s case is yet another reason school boards across Virginia should adopt the model policies from the Virginia Department of Education,” said Eden Heilman, legal director at the ACLU of Virginia. “Discrimination has no place in Virginia schools, and Virginia taxpayers should not be forced to foot the bill for school boards who act in disregard for the law.”

Posted by planet trans at 8:22 AM No comments:

The Gloucester County School Board is  asking the U.S. Supreme Court to review its transgender bathroom ban after rulings by lower courts that the policy is unconstitutional and had discriminated against former student Gavin Grimm, chron reports.

In 2015 Gavin Grimm began the 10th grade at his new school district in Gloucester he used the boys bathroom as any boy would.  Then for no reason the Virginia School Board reversed itself and banned Gavin from the Boys bathroom.

Then in Sept. 2015 a district judge ruled against Grimm deny him his civil rights and sided with the School District. On April 2016 the The Fourth Circuit Court of Appeals admonished the District Judge, sending the case back to him to which he then ruled in favor of Gavin Grimm. On October of 2016 The Supreme Court announced that it would rule on Grimms case but instead ordered a stay sending the case back to the 4th District Court appeals. The 4th Circuit Court of Appeals on September 2020 denied a petition by the Gloucester School Board for a full Appeals Court Hearing.

The Gloucester County School Board hasn't learned anything after years of court rulings protecting the civil rights of former transgender student Gavin Grimm.

"The U.S. District Court for the Eastern District of Virginia and the U.S. Court of Appeals for the Fourth Circuit have both ruled that the school board violated Title IX and the Equal Protection Clause by prohibiting Gavin from using the same restrooms as other boys and forcing him to use separate restrooms — simply because he is transgender."

The Supreme Court was scheduled to hear Gavin’s case at an earlier stage of the litigation in 2017, but the case was sent back to the lower courts after the Trump administration withdrew the government’s support for Gavin’s claims. Since that time, three federal appeals courts have ruled that discriminatory restroom policies like the one in Gavin’s high school violate Title IX and the Constitution, and another two appeals courts have rejected claims that policies like the one Gavin seeks here — which would allow transgender students to use the restrooms — infringe on anyone else’s privacy.

As the Fourth Circuit noted in its decision ruling in favor of Gavin, the Gloucester School Board has continued to discriminate against Gavin, “while schools across Virginia and across the country were successfully implementing trans-inclusive bathroom policies, again, without incident.” It added, “It is time to move forward.”

“I graduated four years ago — it is upsetting and disappointing that Gloucester County continues to deny who I am. Trans students in Gloucester County schools today should have the respect and dignity that I was denied. Whether it’s using the right restroom or having transcripts that reflect who we are, we all deserve to go to a school that’s free of harassment and discrimination.”

"The president's belief is that trans rights are human rights" -- Jen Psaki pic.twitter.com/8VOMcN4XoR

Supreme Court Affirms Trans student Rights to Public Accommodations On Monday Dec. 7, 2020 the US Supreme Court declined to hear a case in which a lower court from Oregon had ruled in favor of transgender student rights.
Posted by planet trans at 8:02 AM No comments: