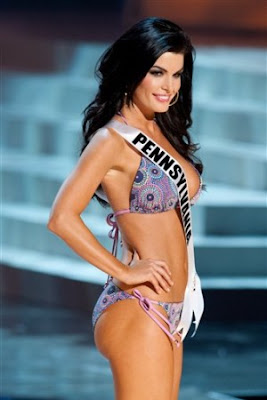 New York (AP) — "A beauty queen who claimed this year's Miss USA contest was fixed has been ordered to pay the pageant organization $5 million for defamation."

"In a decision signed last week, an arbitrator found that the comments from Miss Pennsylvania USA Sheena Monnin were false, harmful and malicious. Monnin had alleged that the five finalists had been selected in advance of the pageant's live telecast."

"The arbitrator, Theodore Katz, said Monnin had two motives: "She was a disgruntled contestant who failed to make it past the preliminary competition" and she objected to the pageant's decision to allow transgender contestants. He wrote that the way the contest is judged "precludes any reasonable possibility that the judging was rigged."

Posted by planet trans at 5:48 PM No comments: