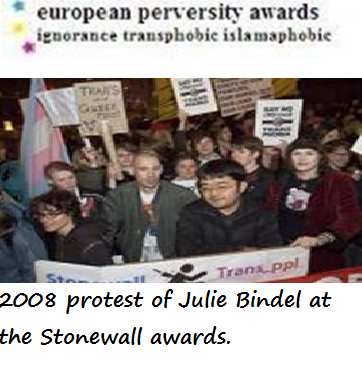 In 2008 I wrote the article London Calling : Transphobic Julie Bindel Nominated Writer of the year by Stonewall UK about this rad-fem transphobic woman who unbelievably was up for a journalistic award by London's gay advocacy group "Stonewall".

She did not receive that award due to the transgender and queer outrage. Stonewall decided at the last moment to avoid the negativity and condemnation that undoubtedly would have followed.

Now just a few years latter Julie Bindel is up for another award this one unbelievably is for diversity! !!OF ALL THINGS!!

Once again queers and trans people will be forced to take to the streets but this time Bindel has made another enemy, Muslim people.

You can get the details at

If you are on Facebook you can join the "Picket the European Diversity Awards" for all the latest updates.
Posted by planet trans at 10:03 AM