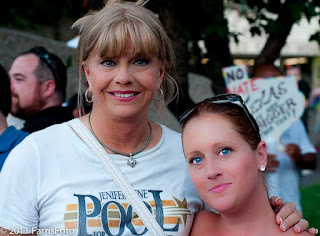 She was recommended by a Gay political activist, a dear friend and ally who I trust implicitly whom now lives in Houston. I spent weeks talking to nearly all the political organizations and activists in Houston each and every one gave Jenifer Pool sterling recommendations. I was So impressed with her I wrote a factual news worthy article exposing a conspiracy to deny Pool an endorsement by the Victory Fund and attempts to divide the LGBT vote by Lesbian Council Member Sue Lovell.

I talked to everyone except Transgender and Transsexual people. It quickly became apparent to me I had made a major mistake. Because Jenifer had come so highly recommended by the Gay and Lesbian community I had not consulted a single Trans person. Nada. Zip. Not one.

So I posted The 64 Dollar Transgender Political Question, Will Jenifer Pool Remain Faithful to us? with a similar note on Facebook asking for feedback.

And feedback I got.

I was one of the transgender community who protested HRC after being betrayed in 2007 over ENDA so I am more than empathic with the anti Gay.com sentiments expressed on that note by sister and brother advocates. But I am also more than willing to take undue credit for HRC relenting and adding us to their mission statement. Also coming to light in that note is the angst within the Transgender community regarding the history of transgender identified candidates allowing HRC to co-opt the transgender message and taking credit for work we did to for that candidate.

So there is a hesitancy to endorse a transgender candidates. Because in the past they have more often than not hitched their wagons to HRC's money horse after our initial support eventually pitting the transgender community's health, saftey and political future against HRC's powerful agenda. Such was the case just this year in Maryland. We prevailed in that instance despite HRC's Trans token tom's best efforts.

But we transgender people who protested were not the only ones to bring about change during the ENDA upheaval. Not only was my group The Dallas Transgender Advocates and Allies added as a supporter of United ENDA so also was the Houston GLBT Caucus and hundreds of other TLBGQIA groups.

But the 64 Dollar Question still remained unanswered so I took a cue from sister blogger Monica Roberts who commented "verify, then trust..."

So I called Jenifer again and asked her to talk about this crucial topic. I explained my personal involvement protesting the HRC post 2015 and asked with baited breath if Jenifer understood the anger of the comments on my Facebook note.

Jenifer Pool replied "No I do not" and my heart stopped. I thought oh good god, not again but Jenifer explained "Of course I attended the 2008 Houston Gala, I was on the HRC diversity steering committee at the time doing my best for an inclusive ENDA. In that capacity I facilitated writing a letter to the national leadership but our influence on the national organization was of course limited." Pool goes on to explain "And at the time I was also president of the Houston GLBT Political Caucus and because of my insistence we joined United ENDA.

Now it was time for the 64 Dollar money question.

I asked Jenifer if she would support a transgender "equality" bill without public provisions accommodations. We as a community need to know if she would support one such as HR235 in which HRC assisted Equality Maryland unsuccessfully tried to force on us earlier this year. Jenifer Pool replied "No I would not. A transgender protection bill without public accommodations provisions is not an equality bill at all."


There you have it. The answer to the 64 Dollar Questions.

Never before to my knowledge has there been a transgender politician so forthcoming and accessible. When I called Rene Pool last afternoon once again she was a delight to speak. Her answers are offered without hesitation and clearly she was speaking from her heart.

And as it turns out, I am still unquestionably supportive Jenifer Rene Pool. So much so that she can add the Dallas Transgender Advocates and Allies to her growing list of endorsers. I am that sure of this.

But this is all just an opportunity. We can make this our reality if you give Jenifer Rene Pool half a chance. Will you give her a chance?

Well it is good to see she will stand by us and against those who will slice us only a partial loaf (or excise us totally).

Now the "no I do not" [understand] quote took me aback. That's the type of response I'd expect from HRC; tone deaf. Then again, the question was phrased "anger," which (I'm not sure) some respondents may have been. Regardless, I wasn't expecting that response. While we're on opposite sides of the HRC issue, I still understand why she did what she did. All newbie activists walk into meeting HRC with the same hopefulness, and for the latter-day hopefuls, HRC is even providing them with some enticements (as Jenifer's enjoyed, thus her enhanced political prominence), which is much easier than attempting it the traditional way (and still not achieveing it.) That's understandable, even if we philosophically diverge.

I'm glad she gets to partake of the benefits from HRC. But again, though, those benefits are individual and should not be superimposed across the remainder of the community.

The long-time political Trans folks: Phyllis Frye, Sarah DePalma, Monica Roberts, Katrina Rose, et. al. have long ago gotten beyond the anger stuff. HRC is an obstacle, not at all unlike conservative GOPers, but someone we know to count on as adversarial and to work around. That's simply an issue of mistrust. And for Trans folks who cross the line to HRC (just as union members crossing a picket line) it's an issue of disappointment. We understand why they do it for personal reasons, but still recognize that it breaks us up and waters down our efficacy and ability to unify into a stronger voice. It's divide and conquer.

We may be working for similar (if not the same) goals, but it's for two completely different, competing sides (a competition began, and to this day still never relented upon by HRC). One side (HRC) wishes to revise and cosmetically bury their ongoing history on T issues while completely burying and denying the trans community's forebearers their history on our own community (as well as LGB community efforts that didn't include us.) The other side (T forebearers/activists) wishes to bring it all out in the open and to keep from having their own work over the years/decades buried. I would be surprised if Jenifer didn't understand that.