An elementary school student in Murray Utah didn't know the book they asked their teacher to read would cause such an uproar.
*Planet trans is identifying the child with gender neutral pronouns until such a time when we know different..
Parents objected to the book the student brought from home “Call Me Max” resulting in an orwellian purging of racial and gender equality books from the district school libraries. The child probably just wanted to introduce themselves to their classmates and now they are scarred for life.

Their book “Call Me Max” is about a transgender child who wanted his teacher to call him Max. It involves people of color whom may be gender non binary, gross bugs, cisgender classmates and their journey together to an understanding that not everyone is just like them.
Posted by planet trans at 6:25 PM No comments: 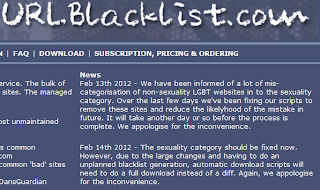 The same web filtering service employed by the district allowed sites to be viewed by students that portray LGBT people negatively categorizing them as religious!

"Camdenton schools use urlblacklist.com to categorize web addresses. The company, Laughrey wrote, assigns categories to websites. Ones that express a positive view toward LGBT individuals are put into its "sexuality" category, which Camdenton blocks. Ones expressing a negative view toward LGBT individuals fall into the "religion" category, which Camdenton does not block."

The district has 30 days to comply. Not "oh whoops, our bad". Heads should roll.
Posted by planet trans at 9:46 PM No comments:

OK, so this was too much to stomach. For prosperity I need to document the evil underhanded tyrannical being that is the executive director of Equality Maryland. !Please sign the petition against HB235

First lets take a trip with 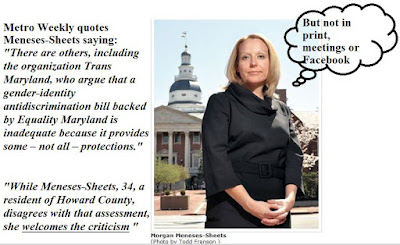 Metro Weekly into revisionist gay fantasyland which paints Morgan Meneses Sheets as a champion of transgender people who welcomes criticism.

I have documented the campaign of censorship led by Morgan Meneses Sheets. !Please sign the petition against HB235

Numerous other transgender and cisgender advocates myself included are banned from commenting on the Equality Maryland facebook page. There are dozens of documented instances when rational respectful comments have been deleted by Equality Maryland.

Equality Maryland's note FAQ – Censorship, HB 235 and the EQMD Facebook page. stated that the censoring of opposition to HB235 on their facebook page was done because there were physical threats of violence made against her, the Equality Maryland Staff and the lead sponsor of HB235 Del. Pena-Melnyk.

That note which written in defence of EQMD's censorship was quickly disputed by those of who were not banned. Those who did comment had some of there comments deleted including the past president of the EQMD board.

!Please sign the petition against HB235
In fact Del. Pena-Melnyk has endeavoured to silence her critics by calling the Executive Director of TransMaryland, myself and others screaming threats that if "you people" show up at hearings she would pull all support for transgender people!

Transmaryland held a protest after that meeting and the next day Equality Maryland cancelled all further meetings until the end of the legislative sessions with the transgender community claiming “scheduling conflicts” as the reason.

Sheets is to far into this lie to have any hope for redemption so in desperation fearing the inevitable membership upheaval she makes preemptive strikes hoping to cover her lies with so much regurgitated vomit most courageous journalistic crusaders would be repulsed by the stench alone. Not me Sheets.

Trickle Down Civil Rights? Not on my Life!Please sign the petition against HB235
Posted by planet trans at 9:05 PM No comments: