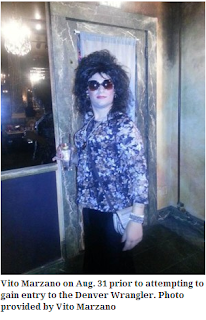 The Denver Wrangler has threatened Vito John Marzano with a lawsuit should he not remove all copies of the video of there staff harassing him on public property (the sidewalk) after they denied him entrance to the bar.  The video makes it very clear the Wrangler staff  bared him because of his gender expression telling him his feet were to big for him to be transgender.. It is unclear if the Denver Wrangler will likewise threaten  media sources but it would be safe to assume they will, given their history of intimidatory behaviour.

This is just the last of many attempts by the Denver Wrangler to coerce Marzano into removing all evidence of the occurrences on that August night.

Wouldn't it be to there benefit if they were publicly exonerated by Colorado Civil Rights Division? Or is it that they know they are in the wrong and are attempting to get rid of the evidence?

The letter sent by a lawyer retained by the Denver Wrangler to Vito John Marzano: 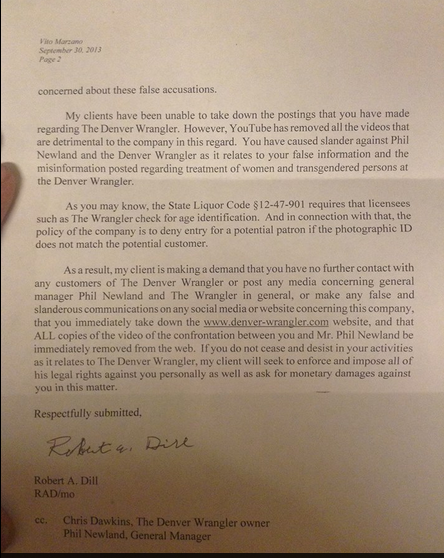 "This is a clear intimidation tactic. The lawyer and I both know that I have not said anything which has not been backed up with screen shots or video. About the video, I encourage everyone to mute the sound (as to not get distracted) and look closely at the video. You will see that I am standing in front of the metal barricade, which ends right where the sidewalk begins. The video was filmed on a public sidewalk. Furthermore, my phone was up the entire time. It was quite obvious I was filming. Being as we were on a public sidewalk holding my phone up and saying things like "I cannot wait to post this on the internet" I can safely conclude there was no presumption of privacy. Moving on, if the Wrangler is so comfortable in their position, why are they trying to destroy the evidence?
There is a simple answer to all this- change your ID policy. Stop the discrimination. Treat all of your patrons equally and with dignity. Once that happens, I will gladly dismantle the website, video, and boycott. Until then, I have not done anything illegal and this will continue.

The video of the Wrangler staff denying Marzano access to public accommodations:

Source Denver post.com: Pete Meersman, president and CEO of the Colorado Restaurant Association, said he understands the liquor-license side of the law better than the discrimination laws but sees the conflict that businesses face.
"This was a new situation that I had not heard of before," Meersman said. "The ultimate dilemma is doing one thing to stay in compliance with the law that gets you out of compliance with another
Vito Marzano's driver's license ( | )
law." 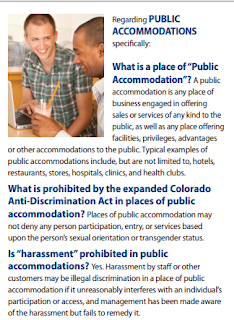 Management at the Wrangler could not be reached for comment, but a video of the altercation posted by Marzano to YouTube — which has since been taken down — outlines the bar staff's reasoning: Gender identity must match a person's ID gender.
"The problem here is the application of a blanket rule that discriminates against a particular class of people based on their gender nonconformity," said Mari Newman, a Denver-based civil-rights attorney. "While I acknowledge the bar's legitimate interest in not running afoul of liquor licensing, this, by its term, is not a legal way to accomplish that goal."
Checking IDs is not required by law but is the only way bars and restaurants have to verify a customer's age. Subsequently, there is no standardized method for comparing a person's ID with their physical appearance — those policies are determined and set by the business owners.
The statement attached to Mr. Marzano's  DORA complaint

Posted by planet trans at 8:39 PM No comments:

Update: Mia Macy The Trans Woman Who Won The Right To Fight Discrimination Under Title VII 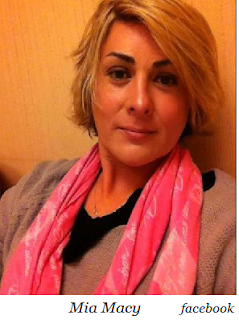 With all of the despairing over the lack of movement of ENDA and a perception that without it trans people are powerless to fight workplace discrimination, just a reminder (to myself as well) we are protected.

Prior to transitioning Mia Macy, a veteran police officer, applied with the Bureau of Alcohol, Tobacco, Firearms and Explosives Agency in December 2010. She was told the job was hers pending a background check but when she contacted them again to inform them of her transition they first told her the job had been eliminated due to budget cuts. Unsatisfied with that response she pursued it again and they told her the job had already been taken.

The EEOC sent her a number of replies indicating they would not process her complaint regarding gender identity stereotyping so Mia Appealed.

In a long and drawn out battle Mia finally won the right for transgender people to be included under Title VII because the EEOC ruled on appeal that the"...term “gender” encompasses not only a person’s biological sex but also the cultural and social aspects associated with masculinity and femininity. 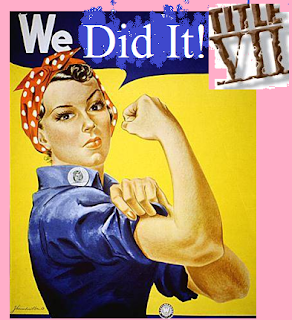 On December 9, 2011, Complainant filed an appeal concerning her equal
employment opportunity (EEO) complaint alleging employment discrimination
in violation of Title VII of the Civil Rights Act of 1964 (Title VII),
as amended, 42 U.S.C. § 2000e et seq. For the following reasons, the
Commission finds that the Complainant’s complaint of discrimination
based on gender identity, change of sex, and/or transgender status is
cognizable under Title VII and remands the complaint to the Agency for
further processing.

Posted by planet trans at 9:35 AM No comments:

Judge Callahan believes that becuse federal law was written to protect all Americans it should pertain equally to all.

According to the the Dallas Morning News 'He [Judge Callahan] cited wording in the state Family Code that "the law of this state applies to persons married elsewhere who are domiciled in this state. And he noted that "Black's Law Dictionary defines a person as a 'human being.' "

Posted by planet trans at 9:16 AM No comments: