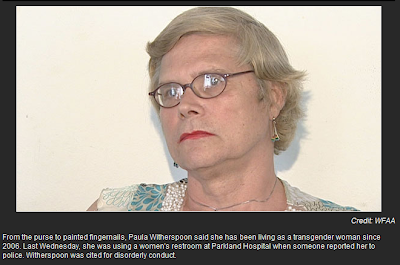 The hospital said at the time the ticket she received was 'under review' casting doubt on the validity of the charge and the Parkland police actions.

In the meantime Paula Witherspoon must call for police protection before she uses the bathroom at the Hospital.

But this may change as Parkland Hospital announced they are reviewing there personal policies with the intention" to prohibit discrimination on the basis of gender identity, gender expression and genetic information."

I spoke with Rafael McDonnell Communications and Advocacy Manager Resource Center Dallas who said "Next Tuesday 1/22, the board of managers for Parkland Hospital are expected to add transgender protections to their nondiscrimination policy. The hospital has more than 8,200 employees, and is the largest public hospital in North Texas. The Dallas Business Journal broke the story but incorrectly stated that the policy will come up next month."

"Parkland has also agreed to take part in HRC's Healthcare Equality Index survey for 2013. They would be the first hospital in DFW to do so, and only the second in the entire state of Texas. With the policy addition, Parkland will become the only hospital in Texas to have a fully inclusive nondiscrimination policy and offer domestic partner benefits."

Rafael the driving force behind most of the DFW's incredible LGBT progress will be speaking at the January board of managers meeting.

Trigger warning: Outing and misgendering. The interviewer accusingly asks Paula 'Are you sure you didn't do anything wrong in that bathroom?"

Posted by planet trans at 10:14 AM No comments:

Paula Witherspoon, a transgender woman from Dallas Texas was ticketed for using the ladies room after another woman told hospital police she was made 'very afraid' by Paula. A day ago the Dallas Voice broke this story. I called friends in Dallas, not knowing Paula personally, before committing my reputation in her defense and what I was told made me hesitate in posting. I needed to wait, given how much had not been brought to light and the importance of this story. 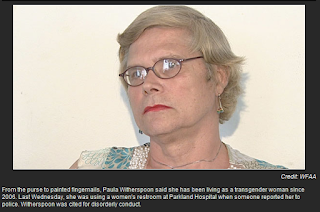 What my friends told me turned out to be true. Paula is a convicted sex offender on parole and does wear a ankle braclet. Paula's legal name has not been changed to reflect her feminine expression, a fact some news outlets taut, while misgendering her with male pronouns like a additional damning piece of evidence of misdeeds.

That's enough to motivate me to post. I have been forced to endure a very similar transphobic bathroom attack just miles from Parkland hospital. Parkland says the ticket she received is 'under review' casting doubt on the validity of the charge and the Parkland police actions.
Is Paula a victim having been identified as a easy target by a hateful woman or did she actually commit a crime in that restroom? If justice prevails we will learn the truth, or what the is perceived by the the majority as truth in the form of a verdict.
KHOU 11 Houston's impartial and unbiased report

Posted by planet trans at 5:27 AM No comments: