Belovedness and The United Methodist Constitution: Does All Mean All? 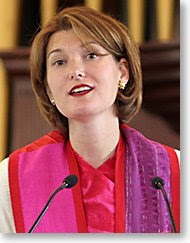 Sometimes in my wandering I happen to come back to the United Methodist and am instantly thrust into the very passion of Christianity.

A blog post found on "Religion is a Queer Thing" by Rev. Tiffiany Steinwert, pictured right,

"Belovedness and The United Methodist Constitution: Does All Mean All?"

"There is a story that another UM pastor, Janet Wolf, tells about one of her parishioners. This story about Fayette has become gospel for me in understanding the fullness of the meaning of baptism in our Christian tradition. You see Fayette, although new to the Church understood the power of baptism deep her in soul."

"She came to Janet’s church one summer, pacing back and forth outside the open doors, listening intently to the music, the laughter, the words. Occasionally she would crouch down on the front steps engrossed, amazed and astounded at what she heard. Little by little that summer Fayette moved from the sidewalk to the steps, from the steps to the door and finally one day from the door to the pew."

Please read and share Religion is a Queer Thing.
Posted by planet trans at 9:32 PM No comments:

For myself 2008 was a year of unanticipated profound change with a avalanche of love, passion, caring, worship, happiness and sorrow all bundled together in Jesus's name and presented as the Reconciling Ministries Network!
I had been called to witness(i didn't even know what that meant) and I was confused and scared by this force appearing out of nowhere drawing me to the United Methodists 2008 conference in FT Worth.
This began the most incredible two weeks of my life. What an absolutely fantastic religion! Alive and vibrant, struggling to understand the rainbow of blessings within. The people of the RMN are a driving force inside of the United Methodist Church and are truly doing Gods work. If you are queer, questioning and/or transgender and feel isolated and alone? Dude pull up a chair because we are among our church. The RM puts the work in network and lives radical inclusion.
Posted by planet trans at 5:37 PM 1 comment:

Ten Questions for California United Methodists who voted on Proposition 8

Full Disclosure: I am a 75 year old, African American United Methodist clergyman who was first ordained in 1956. I am straight and have been in a heterosexual marriage for almost 51 years. If I had been a resident of California, I would have voted No on Proposition 8 that defined marriage as being limited to one man and one woman.

1)Was your vote determined by your understanding of Scripture and/or legislation in the United Methodist Book of Discipline?

2)If Proposition 8 had read: "Marriage should be limited to one man and one woman of the same race/ethnicity", would your vote have been the same?

3)Do you believe that in our democracy, numerical majorities have the right to vote to limit the civil rights of numerical minorities?

4)Do you realize that while the U.S. Supreme Court declared in 1954 that the practice of racial "separate but equal" public schools was invalid, the United Methodist Church did not eliminate its "separate but equal" racial Central Jurisdiction until 1968? Does this not suggest that there is a history of the state proclaiming equality before the church? Why did a majority of the voters of California support the "same old, same old"?

5)How are heterosexual marriages in California enriched and enhanced because of the majority vote to deny same gender marriage?

6)Do United Methodists of Color and others who voted to support Proposition 8 realize that the Biblical and Church rationale that some of its initiators professed, was the same rationale that once restricted the rights of people of color? If they now develop a Proposition to limit the civil rights of persons of color, would you support it?

8)I am disappointed as are others because many people of color who were strong supporters of Barack Obama were also supporters of Proposition 8. But, my disappointment is made more moderate because of the history of white majority decisions that limited the rights of people of color. Is it helpful for us as United Methodists to acknowledge the linkages between all of the actions to restrict the civil rights of persons whether because of race/ethnicity, gender or sexual orientation?

9)Do you agree that it would be un-democratic, un-civil, unreasonable and unfaithful to allow the majority vote to support Proposition 8 to make invalid the thousands of same gender marriages that were performed when they were legal? If ever a "grandfather clause" was in order, it is now in order in California

10)The tears of joy that many of us shed in response to the election of Barack Obama were a response to our acknowledgment of the utter foolishness of the attitudes and actions that once made impossible the election of an African American President. When same gender marriage becomes legal in California and the rest of the nation, we will again shed tears as we remember the foolishness of the vote to support Proposition 8. Regardless of how you voted, do you now dare admit how tragic it was to even consider a Proposition 8 in the 21st century?
Posted by planet trans at 2:29 PM 1 comment: