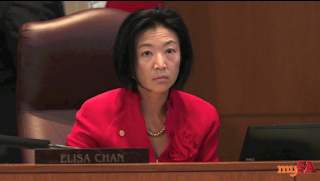 That exclamation escaped the lips of District 9 Councilwoman Elisa Chan on May 21 in her City Hall office, where she was meeting with members of her staff to discuss the city's proposal to update its nondiscrimination ordinance, adding protections for sexual orientation and gender identity. ~ mysanantonio.com

One person advised Chan on her tactics ..you'll score the most political points by standing up and being anti gay because its not an economic argument, its not a small government argument its a social cultural argument and you'll get the most points by taking a stand..and by doing so admitted that they had no intention of governing fairly. They are plotting to squash a equality measure based on their bigotry.

"personally its disgusting to think about...." Chan comments about LGBT people's lives but balking at stating this view in public acknowledging it would hurt her career.

Chan suggests she lie about her knowledge of transsexualism in order to kill the amendment " ...maybe we can throw some questionable confusion because the definition is so confusing, I was not educated on what transgender is about..." then Chan go's on to mention various web sources that offer information about transgender people.


San Antonio Mayor Julian Castro (D-Texas) does not support Chan's remarks.
"Councilwoman Chan's remarks were hurtful and ignorant," Castro told Huffpost in a phone conversation Friday. "[No one should] believe for one second that they represent the views of San Antonians. Ours is a city that welcomes everyone and appreciates diversity."
While Castro supports the nondiscrimination ordinance, Chan and councilman Carlton Soules plan to vote "no" on Sept. 5.
Source Austinist: James Stevens, the aide who recorded the conversation and leaked it to the San Antonio Express-News,explained to reporter Brian Chasnoff why he decided to make Chan's bigotry public: "My decision to record in the first place was that, during the staff meetings, we weren't really discussing the ordinance itself. We were really just talking about ways to appeal to the (voting) base and to get them fired up as opposed to analyzing the ordinance."
Chan "is only focused on her political future," he continued. "She's not focused on the policy itself and how it's going to really affect the city. We spent 80 percent of that meeting talking about how disgusting homosexuality is."
Stevens quit his job in Chan's office earlier this week.
Posted by planet trans at 2:14 PM No comments:

TransPanic in San Antonio. Another beaten transgender woman to blame?

Another skewed Texas news report parroting wording that infers curability on the transgender victim and suggests the one who committed violence was somehow justified since he 'snapped' after learning that the person was transgender.

You further denigrated her position when you made a point that she was 'begging' at a stranger's door for help!

WTF. That is what victims do EVERWHERE anytime they recover enough of there senses after being beaten and left for dead. That is what the Ken5 writers would do.

Who's account is Ken5.com and the police using as irrefutable fact? The criminal assailant? It certainly was not the victims.

Most of the time the attacker had already performed sex with the victim and as a way of escaping peer condemnation, expunging there conscience and repairing there egos beat the transgender victim. More often than not they are gang members who attack transgender sexual partners in order to avoid a beat out by fellow gang members.

As despicable as the assailant was this news channel found a lower level as they painted him as a unwitting dupe.

You can change social mores by commenting at Kens5.com. The victims story must be told fairly and impartially.
Posted by planet trans at 10:23 AM 2 comments: