Visit msnbc.com for breaking news, world news, and news about the economy

Since this is a blog and I don't adhere to Maddow's high professional standards.....

Bob Hunter is a cockroach, and drawn out of the moist darkness of obscurity he is sent scurrying to distance himself from the family and attempts to obscure the relationships and influence he and national prayer breakfast family members have in the national politics in each others countries.

This interview should immediately motivate President Obama to issue presidential decrees to distance church and state.
Posted by planet trans at 9:51 AM No comments:

The Family aka the fellowship, which attributes its successful seventy year anti human rights campaign to maintaining a secretive profile, is hosting Congressional representatives and other American leaders at the 'National Prayer Breakfast' to spread its vision of death for lesbian, gay and transgender people.

Listen to NPR 'Fresh Air' on WHYY The Secret Political Reach Of 'The Family'. I was horrified as to the insipid treachery of this shadow fundamentalist group and I am sure it will shock you also.

TWO Truths warns us that 'The Family' Is Directly Linked To Draconian Anti-Gay Death Bill in Uganda and it's time to lift this Vail of secrecy and reveal the atrocities the 'family' intends to unleash on you and your christian family. 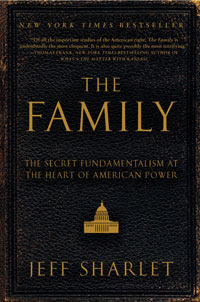 end to the Families agenda. Those who do not are giving tacit support to murder of innocents in Uganda by paying the salaries Congressmen and Senators who expedite this merciless persecution and executions of gay, lesbian and transgender people.

This is happening today in Uganda. The family wishes the same for LGBT people in America tomorrow.

Ips news.net RIGHTS-UGANDA: "You Cannot Tell Me You Will Kill Me Because I’m Gay"

Unified worldwide Anglican condemnation of the criminalization by Uganda of homosexuality is desperately needed as INTEGRITY URGES THE EPISCOPAL CHURCH TO TAKE A STAND AGAINST ANTI-HOMOSEXUALITY BILL PROPOSED IN UGANDA "Our church has already spoken through Resolution D005 at General Convention in 2006 opposing legislation criminalizing homosexuality..." Michael Russell author of of D005 invites you to sign the petition and leave a prayer or comment for our leadership to perhaps read. Then send the link to all your friends.
******************************
Updated 2000hrs 11/30/2009

[Episcopal News Service] The pending Ugandan legislation that would imprison for life or execute people who violate that country's anti-homosexuality laws would be a "terrible violation of the human rights of an already persecuted minority," Episcopal Church House of Deputies President Bonnie Anderson has said.

Anderson was responding to a Nov. 16 request that Presiding Bishop Katharine Jefferts Schori, Archbishop of Canterbury Rowan Williams, Archbishop Henri Orombi of Uganda and she speak out against the legislation. Anderson is the first to issue a statement. Read statement from Episcopal Life Online House of Deputies president condemns proposed Uganda anti-homosexuality legislation

The Revealer A daily review of religion and the press.

Posted by planet trans at 10:00 AM No comments: