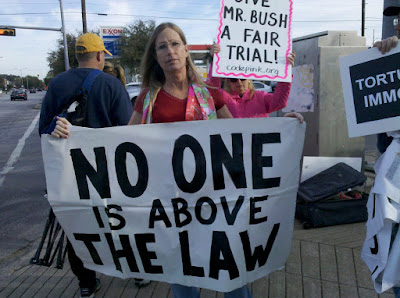 Protesting with Code Pink at GW Bush's signing of his memoir "Decision Points," a guide to torture in Dallas Texas, 2 miles from the Bush residence. We demand Bush be made accountable for authorizing torture, imprisoning innocent foreign national. 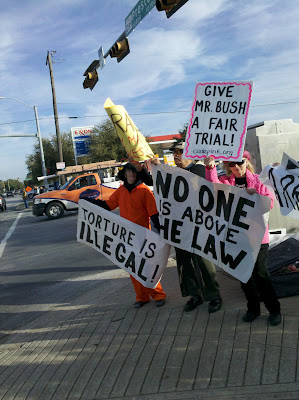 We demand the United States immediately cease spiriting away people to former soviet block countries for torture. We were regaled unceasingly by cars passing by with with shouts of "FUCK YOU", GO HOME, YOU SUCK.

One bible thumper looked me in the eye and said, well the Koran says 'kill all infidels' so why shouldn't we torture them?

I asked if he had ever read the Koran on much to his credit he admitted he had not. I told him the same was true for many fanatic Muslims and Christians, both groups hatred of each other being fed by a misquoting hating voice.

Not that that excuses Bushes torture. NO it DOES not.

Our protest peaked when we moved directly across from the Bush heads and started chanting "ARREST BUSH NOW" which resulted in your face arguments and heated standoffs, all under the close eye of a ever increasing police presence.

Another thing. How many log cabin gays are there in Dallas? There had to be hundreds there sucking up to the murderer of our youth.

Look for us on the news tonight.
Posted by planet trans at 12:06 PM