TransAction ConVergence Survey "Who we are" results

The people who identify under transgender transsexual unbrella are now embroiled in a epic struggle to identify ourselves. This crisis has brought many splits in our community with the word 'tranny' being at the epicenter. 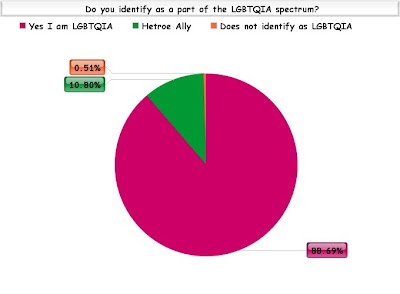 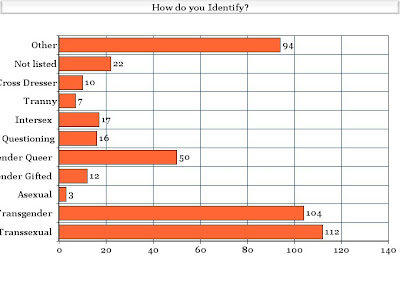 There are two arguments, one advocating the use of 'tranny' and one adamantly opposed to it's usage, with both sides supported with valid contentions.

One contingent of the LGBTQIA spectrum decries the usage of 'tranny' under any circumstances. This group contends that 'tranny' is a pejorative as presently understood, demeaning and demoralizing. This same contingent contends the word 'tranny' has never been accepted widely and in fact is synonymous with other pejoratives such as nigger and conveys the same negative connotations. 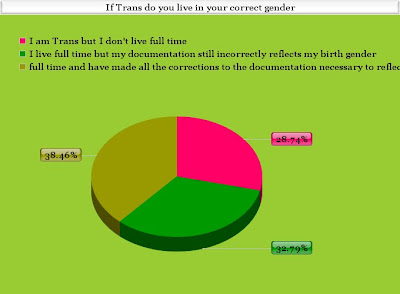 The other argument is for our reclaiming the word 'tranny' thereby establishing our self identity and revolting against modern conventions about the word. This component of our community also righteously calls out the most important tenets of our community, inclusiveness and respect. 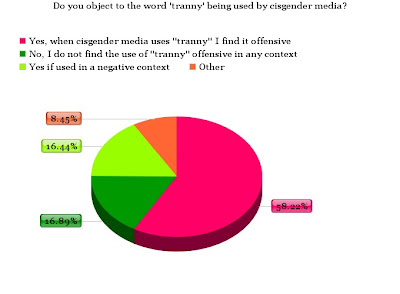 In that this survey was conducted in good faith and all respondents allowed equal opportunities to voice opinions.

It is revealed that:

The majority of peoples identifying under the trans umbrella and allies find the word 'tranny' offensive when used by cisgender media since it's portrayal is enviably negative.

It my hope the people of our community who persist in it's usage and promotion take heed to there own council, respect our communities wishes and desist from this behaviour that is so harmful to us.

Note* All questions were allowed more than more than one response so some answers do not equal 100%.
Posted by planet trans at 8:29 AM

Email ThisBlogThis!Share to TwitterShare to FacebookShare to Pinterest
Labels: Survey

From the data presented here, it is clear that "Tranny" is not acceptable when used by cis media. However it is not possible to draw any conclusions in this regard about trans people using this word about themselves except with reference to the raw data. This suggests that relatively few people consider it offensive when used by trans people.

Those are pretty much the only conclusions it is possible to draw from this data.

While I fully acknowledge there are many who are offended by the word, sorry but I dont see this survey can be considered reflective of the Trans Community only those who frequent this site.
There are many Trans out there who are living freely and comfortably in society, who have tired of all the arguing and buckering in our community, who dont mind the word and just would never bother to express thier view as they see fighting over a word as trivial.
It is a word and can only hurt YOU if YOU allow it to hurt YOU. It doesnt have an edge to stab you; a point to prick you; a bullet to fire at you or hands to hold a pickaxe to beat you.
It is totally up to the individuals mind as to if it hurts you or not. Its how you take it.
Yes some are offended by it and to them it shouldnt be used but to those who are happy with it, it is wrong to force them not to use it.
I personally have taken ownership of it and am proud to be called a Tranny and will defend it with anyone who uses it in a negative way against me. I consider it insulting to me when I see my own fellows write it thus 'Tr**ny' and continue to publicise the word as a perjorative - It isnt to all.

"It my hope the people of our community who persist in it's usage and promotion take heed to there own council, respect our communities wishes and desist from this behaviour that is so harmful to us."

One of these things is not like the other....

Is this the research you mentioned in your last comment on the last blog?

"according TO s surveys we just completed of all trans people across all borders, you JUST offended and alienated over 75% of the trans community."

i've looked at transcription you provided, which suggests there were only 200 or so participants, am I to surmise from that, that you believe there to only be about 200 trans people in the world? Afterall you did survey all trans people.

Furthermore, I notice most participants belong to the same support group, and thus are likely to be from the same geographical area; hardly across all borders.

Finally I'd also like to challange the cross section you questioned, most appear to indentify as binary gendered trans people; hardly a cross section of the viberent commuity I know.

I'll not even mention my objections to leading questions you have used.

I'll also point out that only 16% of respondents stated that they felt 'tranny' was only unacceptable when used neg; not something I feel you can apply to the London TDoR service

But this is a survey about the use of the word "tranny" by non-trans folk and with negative connotations. Monday's debate was about trans folk using the word. In respect of that your choosing of the word "nigger" is very appropriate. At present it is PC to say the word if you are black, but not if you are white.