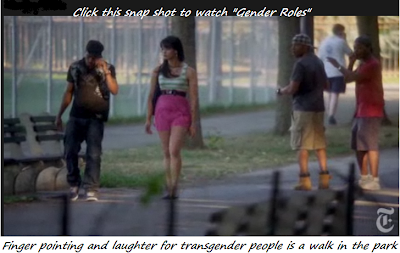 The New York Times ran an amazing article "When They Play Women, It’s Not Just an Act" By Erik Piepenburg about the phenomenal new release "Gun Hill Road"


"What sets this movie apart is it has transgender actors playing transgender roles" Erick explains "but this hasn't always been true."

Indeed there have been a multitude of cisgender actors cast in movies which misrepresented and in some cases where problematic for transgender and transsexual people.

Gun Hill Roads transgender lead actress Harmony Santana a NYC native was precisely who director was looking for. He understood from experience trying to cast cisgender gay actors there was a intangible ingredient missing. He learned from trial and error he needed a sister who shares our road less traveled and finding Ms. Santana was a gift from above! She was early in transition having come up the hard way still living in a homeless shelter for LGBT youth even as the movie was being filmed living the experience.

And complementing the metal of the movie is the NYT author's grasp on our issues as he as he explores the results that drag and exploative movies have had on the Transsexual and Transgender community by interviewing another well know transgender actress Laverne Cox.

My heart went to my throat as the author's article went further examining transgender roles by interviewing Israel Luna director of the movie "Ticked Off Tra##ys With Knives" which was intensely protested by the transsexual and transgender community.

It is a sad commentary that TO#WK movie would be held as a standard for transgender movies but in truth Erik did us a solid in contrasting that movies problematic senseless violent exploitation of transgender people with the true transsexual metal Gun Hill Road.

Hopefully in the future we will see many more movies like Gun Hill Road on our shared road less traveled.

Read the NYT article in full HERE.
Posted by planet trans at 7:20 AM