ABC Work It is Axed! WE WIN! 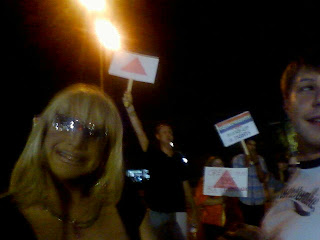 We can't take all the credit for Work It's demise, it was just god awful. But we will bask in this victory. Work It's problematic transphobia inspired people internationally to consider our shared humanity and after reading our petition they signed by the thousands in solidarity.

People came from all corners of the globe to stand shoulder to shoulder with us making our planet just a little more friendly to everyone.

We couldn't have done this alone. We were stagnated around 200 signatures until a article written by Emerson Whitney was published on Huffington Post. That kick started our petition and coupled with the Dallas Transgender Advocate and Allies event and a Care2 guest post I was so graciously invited to write, our cause began to gain some legs.

Then HRC and GLAAD stepped in and added their support but sadly without mentioning the grass roots advocacy that had preceded their involvement.

But our victory highlights just exactly what transgender people can do when we take possession and responsibility for our condition. We can change the world!

Now I hope that the president of ABC Paul Lee is a little more understanding of what made Work It so very offensive. Paul Lee stated it's in his contract he's obligated to produce "cross Dressing" shows. If he attempts a show about gender diversity again lets hope he does it with intelligence, insight, compassion and reality.

The reality is Paul Lee, the world demands it.
Posted by planet trans at 9:14 AM

ABC's current problem is with terminology: "cross-dressing" shows? I think we need next to let them know as a cacophony again is to axe this "contract requirement." If this needs explaining now, then its a sad day again.