Austrialian Norrie says facebook suspended them for saying 'tranny bingo', but is it so? 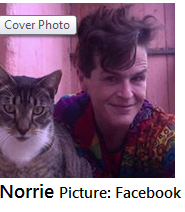 Was Norrie suspended for 24 hours for just saying 'tranny' on facebook? It would appear so judging by the only article currently published about it.

The truth is there isn't a 'tranny ban' on facebook. There never has been. But there are Australian trans people who feel that the privilege to use such a word as the T word, like the N word, belongs to those within the minority it refers to.

Historically Australia is a very manly place. Australians take immense pride in their independence and rightfully should. But this attitude can lead to nationalist feelings, and within the LGBT community inevitably, misogyny, and left unchecked, a silencing of the trans community.

One of my friends, Indi Kelly Edwards, told me one day about how upset she was about four Australian hotels that are using transgender defamation for profit. So I gave voice to Indi's objection to the dissembling gay privilage down under. That article served to inflame the anger of the tranny bingo profiteers.

And about three months ago I posted a review on the Charring Cross facebook pagewhich went unnoticed until "Tranny Bingo" posted this, essentially telling me to STFU and go home.

Post by Kelli Anne Busey.
Which begs the question, Norrie doesn't identify as transgender. Norrie won a court battle to allow themselves to identify as neither male or female so does that preclude Norrie from uttering this defamation?

@spansexual Its a start. Some people aren't naturally respectful and an authority, like Facebook has to step in.
— planetransgender (@kellibusey) August 14, 2014 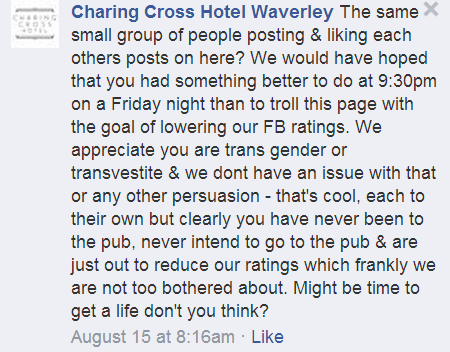 Post by Indi Kelly Edwards.
There is only one thing for certain. Norrie was not suspended for typing the words "Tranny Bingo" Its the  headline of this article, which appears on Facebook. Norrie wasn't suspended because one or two people complained, that's just not how facebook operates. There has to be more to it. A lot more.

And yes 'tranny' belongs to the transgender community. We have the right to object to others using a word that many in our community hear as we are beaten and murdered. Charing Cross, drag queens and associates, don't you think "Gay Bingo" would be appropriate?