Recently, Parker Marie Molloy came under fire for inexcusably trying to get a sister trans woman to self-harm or worse, to commit suicide. Kelsie Brynn Jones debated long about making this public, and she finally did on queerty.

Jones wondered whether Parker had done this before. Parker has done something awful to me. While she didn't try to get me drink bleach are actions did result in my getting removed as an author for TransAdvocate.

Parker, who had never visited my face book profile before, was alerted by someone to a conversation I was having there with Mark Cummings about the Trans 100. Malloy then began rapid fire messaging me and commenting on my facebook page furious about that conversation. I didn't know this at the time, but parker had a axe to grind with Cummings and saw an opportunity to kill two birds with one stone.


Molloy then baited me in PM's to say something regrettable about Monica Roberts who saw Molloys tweets mentioning her. Roberts waisted no time in responding. I withered the intense toxicity of her friends and apologised to her publicly on Roberts facebook page.

But that wasn't enough. It wasn't an apology Molloy or Roberts an editor at the Transadvocate, wanted. 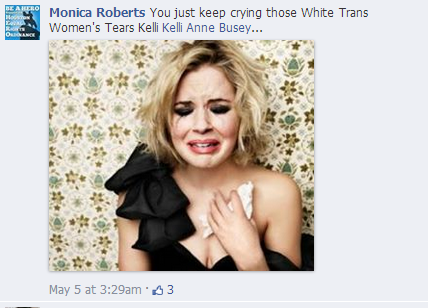 I also debated writing this article dedicated to her actions but in light of her recent actions, I thought it's needed.

What makes Molloy a danger? With her envious writing skills, Parker is able to connect with issues and present them with a style that appeals to the trans community.

Even now I find it hard at times not to peek at something written by her.

Then she strikes out at us, intentionally hurting us demolishing our trust in one another. That is unacceptable. There are no apologies she can offer that will repair the damage she has caused. Will her actions some day cause someone to kill themselves? Can we look the other way now? Can we live with ourselves if she does?

This isn't a revenge piece, but as I said back then you will eventually be called out Molloy. Parker needs to park it.

As trans people we are pretty much all damaged by the cruelty of our difficult path. We're lucky if we only have mild emotional issues. More likely we have depression, anxiety, panic, anger. etc. When someone lashes out at us we want blood so bad because we think, hey, that's BS, I've already been through too much to have to take that. Then conflict like this results. We don't stop and try to understand the other. We bend over backwards to try to make others understand and sympathize with us without regard for the person who you feel wronged you. Love is all you need. Truly. I've ssen little respect and understanding from Addams or her her detractors. Regarding Parker Molloy, I honestly believe that her apology was sincere. Her detractors? Not so much, as evidenced by this continuing onslaught.

The difference between Addams and Molloy is Addams didn't encourage anyone to kill themselves. She didn't tell anyone to cut themselves. Although I disagree with her vehemently she never trolled me waiting for the precise moment to harm me in the worst way possible.

This isn't a witch hunt. I wouldn't have said any more about what she did to me, but after I saw what Molloy has done to others, well its time she gets called out. I am not fearful of her cabal any more. I am not afraid of her posse and I do not care if she and Roberts try to defame or discredit me because I know who I am. I know what I stand for and so does everyone else who knows me.