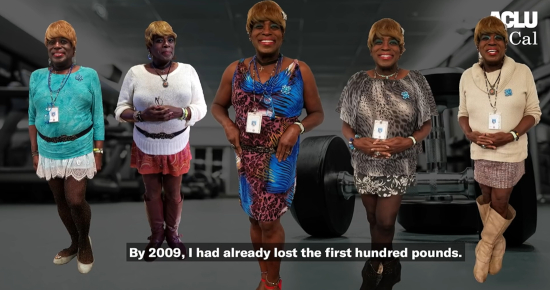 Christynne Wood a transgender woman from El Cajon, California has won a settlement after Crunch Fitness denied her the use of the ladies' changing room.

Christynne valued her gym as she had undergone Angioplasty and was told by her doctor in order to never have that happen again she needed to adopt a healthy lifestyle.

Christynne, a member of Crunch Fitness began to take exercise seriously and lost 100 lbs.
But nine years into her membership, when she informed the gym’s management that she was in the process of transitioning to female, Wood’s relationship with Crunch radically changed. Management refused to allow her use of the women’s locker room and restroom, even though that was clearly her right under California law.
“I feel elated and validated to finally reach resolution in this case,” Wood said. “I hope the settlement helps the owners of Crunch and other gyms appreciate the importance of respecting transgender people’s identities. It’s not only our legal right, but also could save a life.”
The discrimination Christynne experienced is not unusual; a study conducted by the Williams Institute at UCLA found that nearly 70 percent of transgender people have experienced discrimination when trying to use public restrooms.

Cheers to our amazing client Christynne Wood for finally achieving vindication, and heads up to other trans folks in California: you have the right to be yourself at the gym! 🏋🏻‍♂️🏊🏻‍♀️https://t.co/WRlqt4fi6d https://t.co/rhgunlwULf

VICTORY: Today, our client Christynne Wood won a settlement with Crunch Fitness in El Cajon, after the gym had refused her to use the women’s locker room and restroom, even though it is clearly her right under California law. https://t.co/oK9k6H5LJg

Posted by planet trans at 6:11 AM No comments:

The July 2008 shooting during a youth performance of a musical inside the Knoxville Unitarian Universal Church has been identified primarily as a politically motivated crime.

But since the gunman, Jim David Adkisson choose a youth musical at a UU church to kill it makes me pause to wonder if he was not motivated as much by a hate of lesbian, gay, bisexual and transgender people.

The ACLU has once again demonstrated its understanding of the root cause of bigotry and misunderstanding by filling a suit with the Knox school system seeking it to allow equal access to web sites that are LGBT.

The ACLU quietly dismissed without prejudice the suit after the Knox school system modified its policy.

The ACLU identified a root cause, brought an unglamorous civil lawsuit, and then in victory became masters of the moment with grace and selflessness.

Knowledge opens doors and peace breaks out. Huge Kudos to the ACLU!

Knoxville News.com ACLU suit dismissed after changes made at schools
Posted by planet trans at 6:03 PM No comments:

As you may recall, the ACLU has been trying to get Office of Legal Counsel (OLC) memos that provided the legal basis for the CIA’s illegal torture program.

Tomorrow, April 16, a deadline set in our FOIA lawsuit, we may finally see the documents authored by then-OLC attorneys Steven Bradbury and Jay Bybee. The memos reportedly provided legal justification for the CIA’s use of enhanced interrogation methods — at black sites like the ones Abd Al-Rahim Hussain Mohammed Al-Nashiri was held in — that amounted to torture. The memos also reportedly provided legal cover for the CIA’s interrogation methods in anticipation of Congress’s expected effort to outlaw “cruel, inhuman, or degrading treatment,” which it did in the Detainee Treatment Act of 2005, passed several months after Bradbury issued the memos.
In this new ACLU video, National Security Project Director Jameel Jaffer talks about why it’s so important for the Obama administration to live up to its promise of transparency by disclosing the memos.


If you haven’t already, please send a letter to Attorney General Holder. He’s taken the first step and signed-off on the release of the memos. Tell him now to appoint an independent prosecutor to investigate Bush administration officials who authorized torture.
Posted by planet trans at 3:07 AM No comments:

Governor O'Malley's leadership can make the difference in the House and Senate Committees passing transgender anti-discrimination legislation this year. Transgender people experience bias far too often in employment, housing, healthcare, and public accommodations. When discrimination prevents or hinders a person from gaining or keeping employment, many other problems develop. Rent doesn't get paid, which leads to eviction. Data shows that 42% of transgender people in the DC Metro Area are unemployed and 19% do not have their own living space. Transgender individuals may also be denied access to social services like shelters or rape crisis centers; refused treatment, ridiculed, or denied recognition of their gender identity by health care professionals; or refused service at restaurants or stores.

Posted by planet trans at 10:22 AM No comments:

Planetransgender and the Dallas Transgender Advocates and Allies (DTAA), who's main concern is focused on addressing and righting transgender inequality, marginalization, objectification and victimization in the hetero and homosexual dominated world and press.

The DTAA and planetransgender have remained, despite being targeted by both recently, a staunch ally of Gay and Lesbian people.

ACLU's New Web Campaign, Tell-Three.org, Encourages People to Talk About What it Means to be LGBT included planetransgender in the Blog : Press Clips GET INFORMED: LGBT News for February 6 .

Tell Three
A new campaign in conjunction with Join the Impact and several other national groups that encourages people to tell three people in their lives what it’s like to be LGBT – because coming out just isn’t enough. Learn more at Tell-Three.org.

Straights for No on 8

At the Dallas Transgender Advocates and Allies (DTAA) we live by our by name and have learned from our allies WE CAN be "A place for everyone. No exceptions."

Posted by planet trans at 5:41 AM No comments:

CHICAGO, Jan. 27 (UPI) — The American Civil Liberties Union says it will sue Illinois for refusing to issue a new birth certificate to a citizen who underwent a sex-change operation.

Attorneys announced the lawsuit in Chicago Tuesday, saying the state Department of Vital Records had routinely changed birth certificates for transgender people for more than 40 years before recently pulling the plug on the practice.

“As President, I will close Guantánamo, reject the Military Commissions Act, and adhere to the Geneva Conventions”
– Barack Obama 8/1/07

Tell President elect Obama you support the restitution of American justice and social equality by signing this letter by the New York Civil Liberties Union!

I was deeply moved by your recent affirmation that you will close the Guantánamo detention facilities and shut down the military commissions, which have been a stain on America here, at home and abroad.

Nothing would make me prouder than to see you act on your first day in office to restore America's moral leadership in the world.

With one stroke of your pen, you can close Guantánamo Bay prison, shut down military commissions, and ban torture.

The Bush administration created a prison camp at Guantánamo - a place where they claimed the law didn't apply. They detained hundreds of men without charge or trial, authorized torture, and prosecuted some prisoners in military commissions that violate our Constitution and international law.

We can't let the system of injustice George W. Bush put in place stand - not for a single day.

I want you to know that I will support your leadership on this vitally important issue in every possible way. And I will stand by you every step of the way to resist those calling for you to "go slow" or "wait for the right time" to act in defense of American freedom.

Lez get Real in California Defending our Freedom

How can I express my admiration and pride in our family.

Found on our sisters blog Lez Get Real is an account by p.Johanna of the time she withstood unimageable verbal assault after volunteering to stand duty to form a human barrier between human rights activists and a line of haters,

"Those of us that had volunteered to stand in front of them immediately got into place. I want you guys to imagine standing in the sun and listening to these idiots talking and screaming through a bull horn: "GOD HATES YOU!" "READ THE BIBLE"! "JESUS IS COMING!" "YOU LOST, GET OVER IT!" "THE PEOPLE HAVE SPOKEN!" "WHETHER YOU LIKE IT OR NOT, YOU ARE LOSERS!" and more crap that was vulgar and despicable."

Equality Warriors Stand Tall in the face of hate and bigotry. Not only GLBT people are outraged Straights Against Hate find this situation intolerable.

This Unfair Unjust afront to human dignity will NOT stand.

It is being taken to task by Lambda Legal and the ACLU's combined efforts.
Posted by planet trans at 8:53 PM No comments:

New Attorney General proposed guidelines for the operation of the FBI could open the door for unscrupulous spying according to the American Civil Liberties Union (ACLU) the FBI would have authority to collect information by misrepresentation without limitations to duration or probable cause.

Racial profiling no longer is inhibited and the proposed guidelines are specific in allowing unrestricted spying on any event the FBI deems ".....threats to the national security that occur in the context of or in connection with civil disorders or demonstrations."

This paragraph would permit the FBI to make our dissent of governmental infringement on our personal lives i.e. "NO to California's proposition 8", the unnecessary redundant removal of civil rights proposed by Florida's proposed amendment 2, the protest by Queer Folk over being excluded from the human rights movement or the current Soulforce Equality Ride a legitimate target for unrestricted FBI spying.
Posted by planet trans at 4:29 AM 2 comments:

“Getting fired was one of the worst things that ever happened to me,” said Kaylee Seals a former employee of Old Dominion Freight Lines.

Indeed losing a job is one of the most debilitating events. The Equal Employment Opportunity Commission has found merit in Kaylee's sexual discrimination complaint and opened the door for Kaylee Seal to gain restitution from "Old Dominion". Kaylee has in fact been placed in severe risk by Old Dominion's callous behavior.

This holds true for truckers regardless of gender orientation or sexual affinity which has no bearing on our ability to "GET ER DONE". Our identity and dignity is deeply rooted in living the American truckers life style. Like your CB handle it does not come easily. A truck driver may not go home for months, working and living long hours in the dirt and mud with few creature comfort's, bad food, little sleep and few friendly faces. You gotta love it to stay with it, cause it ain't for the money honey. The people in Kaylee's lawsuit have unfortunately become the norm in our industry. Ms Kaylee is bravely standing up and saying NO, she will not take this. God bless you Kaylee.
But Kaylee is one of many gender diverse truckers.

Sister Kaylee long my you ride! Let her roll! Just for the record!

The America Civil liberties Union has filed in conjunction with Kaylee Seals a lawsuit naming Old Dominion freight Lines the defendant on the findings of the Equal Employment Commission.

Having received a Notice of Right to Sue from the EEOC, Plaintiff(Seals) now
brings this case to vindicate his right to be free from sex and sex stereotyping discrimination.

The EEOC concluded that,

Sex or conforming to sex stereotypes is not a bona fide occupational
qualification for the position of line haul truck driver.

Defendant’s actions were done with either malice or with reckless
indifference to Plaintiff’s rights under law.

As a result of Defendant’s actions, Plaintiff has suffered, and will continue
to suffer, both economic and non-economic losses, emotional distress and other compensable damages.