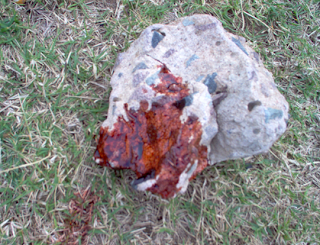 This day and age you might expect death by stoning to belong to a bygone era, but for transgender and transsexuals in some parts of the world that sort of brutality is almost an everyday occurrence.

In fact, we would be fooling ourselves to think we are safe from that bloody rock anywhere in the world.

Just a few days ago transgender woman Janette Tovar  who lived  only 30 miles from my home in Dallas was stoned to death.

The image is gruesome but is it excessive? No because once I too lay on top of a rock just like that near death.

Source: September 24th 2012 Infonet: "The transvestite Amos Chagas Lima, 39, one of the most popular and well known of Aracaju, who earned the nickname of Madonna, was killed with blows of parallelepiped (the) crime occurred in the early hours of last Friday, 19, in downtown Aracaju."

She didn't die right away but suffered for days having just passed on.

I want to write this post with cisgender people in mind. I want you to understand the realities of being trans. We are murdered almost daily worldwide, just for our gender expression. In fact Keila Simpson, president of the National Counsel to Combat Discrimination of the Secretary of Human Rights to the President of Brazil told Gay Star News her country has suffered 100 transgender murders since January of this year.

This is why we fight so hard against being marginalized, and defamed regardless of who, what, when or where. We are never far from the Rock. I know.

18/05/2010 - Keila Simpson, vice president of ABGLT, wows audience at this seminar "Human Rights of LGBT: scenarios and perspectives," in the auditorium Ramos Nereus, the House of Representatives. The text she read - "History of us all" - Rafael Menezes is available on the website of the Commission on Human Rights and Minorities: www.camara.gov.br/cdh

Email ThisBlogThis!Share to TwitterShare to FacebookShare to Pinterest
Labels: TDOR

MUMC: Trans Flag Will Never Fly At Havey Milk Plaza. Not Even For The TDOR 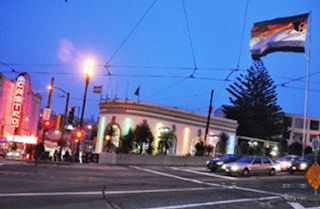 But this past Presidents Day weekend the Bear 2.0 Flag flew proudly in it's stead. To the casual observer, like myself, this change in flags might go unnoticed, even welcomed as Bears have always been one of transgender peoples greatest allies, but there's more to the story. Much more.


The  Merchants of Upper Market and Castro (MUMC) who have control of the flag pole denied a request this year from local trans resident Veronika Fimbres to fly the  Transgender Flag on the TDOR just days after  the MUMC instituted their new policy dictating that the flag pole at Harvey Milk Plaza fly one flag, the Rainbow.

It's not a matter of principle, vanity or pride. It is a matter of respect for a valued allies dead and it only takes one day to show us you really care. Like the MUMC's own web page states we are LGBT people. The flag pole at Harvey Milk Plaza should be flying the transgender flag on the TDOR.

If you also find this  exclusionary flag policy troubling you can:
Sign Veronika Fimbres petition "Demand that MUMC fly the Transgender Flag on the Transgender Day of Remembrance! "
and you can contact the MUMC directly
Phone: 415 - 835 - 8720
Email:: :info@castromerchants.com
or use their web contact form
Posted by planet trans at 6:13 PM No comments:

Ticked Off Tra##ies to be released to coincide with the Transgender Day of Remembrance. Luna's latest sacrilegious impiety intended to injure the living and further desecrate the memory of our transgender dead.

Film director Israel Luna apparently throwing his hands up in disgust after being protested at and turned down by one film festival after another, has opted for a early release, casting his latest failure into the cold November wind, hoping for a place in infamy but in reality simply allowing for it's sad demise along with the other forgettable halloween spook spoofs.

But Luna may never be forgotten or forgiven by the mothers of the murdered children he used to promote this horrendous atrocity. There will be many prayers for the cast during the Transgender Day of Remembrance that they be forgiven for there part in this, Luna's last futile attempt to enrage and humiliate the mothers who's lives were dedicated to loving and caring for their now long gone children.

Luna has taken the gloves off and officially declared what the transgender community has long known. This was confirmed by the releasing company Fangoria Entertainment's president who stated he is thrilled about Luna's choice of a "Halloween Season".

Israel Luna believes that transgender actress Crystal Summers and the rest of the cast of drag queens in his film are freaks and oddities, just disposable Halloween atrocities to laugh at and discard when Dead. Transgender people are just cold meat to Luna and nothing else.

God have mercy on you Israel Luna.