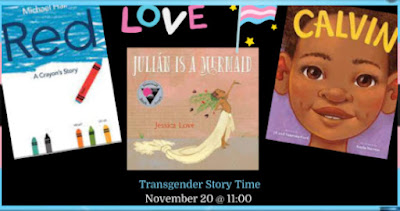 Texas Gov. Greg Abbott taking a page from Fahrenheit 451 has encouraged local extremists to remove 850 books from libraries that mention race or have gay or transgender characters. Out of state anti-LGBTQ groups have weighed in inciting threats of violence against the Denton Library staff and those who planned to attend a reading on November 20, 2021.

Texas Governor Greg Abbott has asked education leaders to investigate what pornography may be available in public schools. He didn’t clarify what he considers to be pornography. His ask comes just days after State Representative Matt Krause released a list of 850 books, hoping to find out if any of the 850 titles – mostly about race and sexuality -- are in Texas public schools.

Citing safety concerns for the staff at North Branch Library and patrons who planned to attend Rainbow Family StoryTime this Saturday, Denton officials announced Monday afternoon that the event — which was to fall on Transgender Day of Remembrance — was canceled. Director of Libraries Jennifer Bekker said in an interview Monday that critics from Denton and beyond mistakenly believed the program was intended to indoctrinate its young audience — ages 2 to 8 — about transgender issues.


When Bekker and her staff noticed social media comments referring to violence over the weekend, she and city officials determined that canceling the event was in the best interest of patron and staff safety.

Red: A Crayon’s Story, by Michael Hall, "A blue crayon mistakenly labeled as "red" suffers an identity crisis. Red is a story about being true to your inner self and following your own path despite obstacles that may come your way.

I’m a Girl by Yasmeen Ismail is about a little girl who's spontaneous, fast, and strong, and loves winning. Sometimes she's mistaken for a boy, but she definitely isn't one! When she meets a boy who likes wearing princess dresses and playing dolls, they quickly discover shared interests and a wonderful friendship.

What Riley Wore by Elana K. Arnold — is a charming picture book, a gentle exploration of self-expression, and a source of encouragement for being true to oneself despite the expectations of others.

None of the books directly reference or mention sexual orientation or gender. But each title explores the idea of difference, and together the books promote self-acceptance and accepting differences.

“Denton’s not going to stand for bigotry and hate, plain and simple,” said Denton resident Amber Briggle, the mom of a transgender son and a prominent proponent of transgender equality in Texas.

According to the Facebook event page the reading has been moved to the Armadillo Ale Works, Denton Texas, beginning at 11:00 am Saturday, November 20, 2021.

She said she changed the reading program a little. Attendees will still get to hear Red: A Crayon’s Story, but they’ll hear a brand-new book, Calvin, by JR and Vanessa Ford, based on the story of their transgender son.