TDoR 2021 the deadliest of years: The US has become a slaughterhouse for trans people 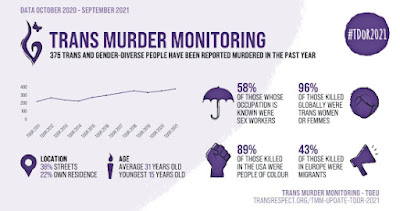 Transgender Europe the source for our Transgender Day of Remembrance (TDoR) list announced yesterday that there were more trans murders this year than ever before.

The TDoR occurs on November 20 yearly which is the day when our community comes together to remember our murdered.

The US is a slaughterhouse for transgender and gender diverse people with last year's total of 36 nearly doubling to 54 violent murders for the 2021 TDoR and a mind-boggling total of 70 wrongful deaths that include suicide, medical, incarceration, and unreported.

The hardest part is that 89% of those murdered in the US were transgender women of color. And most of those murders were committed by people they knew while in their homes or on the street.

Data indicate a worrying trend when it comes to the intersections of misogyny, racism, xenophobia, and hate towards sex workers, with the majority of victims being Black and migrant trans women of colour, and trans sex workers. These numbers are just a small glimpse of the reality on the ground. The majority of the data was collected from countries with an established network of trans and LGBTIQ organisations that conduct the monitoring. In most countries, data is not systematically collected. Most cases continue to go unreported and, when reported, receive very little attention.

The TransLivesProject Remebering our Dead reports that three of the names are duplicated which is comendable gevin the task at hand.

This is what we know so far about those who we will be remembering on this Transgender Day of Remembrance (20th November 2021):https://t.co/pQvoLdj8ti#SayTheirNames #TransLivesMatter #TDoR

Email ThisBlogThis!Share to TwitterShare to FacebookShare to Pinterest
Labels: TDoR 2021