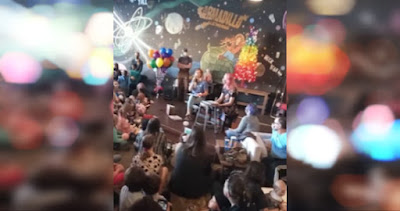 Having never gone to a children's storytime book reading I was curious as to why republican Texas Gov. Abbott, would be so offended by them.

The reading on Saturday took place at a local establishment instead of the library as they normally do three times a year. This came after the library staff said they noticed threats of violence posted in comments by out-of-state and local extremists.

About 150 people attended according to the facebook event page. I would estimate more that that since so many were children brought by their parents.

It was a simple joyous affair. I felt welcomed and safe as I entered the cafe, a feeling that has become very rare in Texas.

Outside a man holding a megaphone was blasting prerecorded random religious messages. And at the very end of that block far away from the the eyes and ears of the children, 3 people were holding signs accusing the Denton library of promoting pedophilia.

A huge thank you to the Denton Police Department. Officers outnumbered the right wing extremists 10 to 1 and allowed the book reading to be what it was meant to be, an event for children.
Posted by planet trans at 6:55 AM