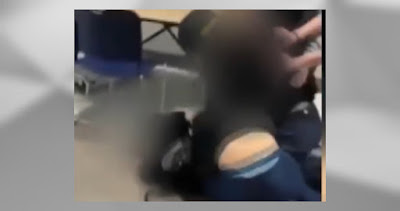 A disturbing video has emerged showing transgender student Willow Andring being attacked from behind by a boy who then beat her in a hallway. The October 27 attack at Armstrong High school left her with a concussion and the nation in shock.

One person who identified as a parent with 5 children blamed the attack on Andring. Her Facebook profile also pushes the big lie and anti-vax propaganda. Donna Bates wrote:

"Im the parent of 3 boys and 2 girls and no I never made excuses for my kids,I made sure they took ownership of their actions . The problem is parents encourage their kids to do whatever it takes to be the victim and unfortunately that includes hormone therapy, race pity, and mental health. I don't agree with bullying or violence but it's not right to label one child as such along with saying he's abusive to girls while the other child is said to have been the bully and is not biologically a girl . It's a fantasy world that is discriminating against those who live in reality."

Following that attack Armstrong district school students grades 7-12 were banned from hocky games for the rest of the year after students chanted "she's a whore" at the opposing school female goaly during a game.

Armstrong's principal, Kirk Lorigan, said school officials were “appalled and embarrassed” and he was “disgusted” that parents and security guards did nothing to stop the chants. He apologized to the player, the team and the Mars community, the Pittsburgh Post-Gazette reported.

Lorigan said that officials were still investigating but that “appropriate school discipline has been used." The Post-Gazette reported that he declined to say Thursday night whether suspensions were imposed.
The school board also didn't specify disciplinary measures. It was unclear whether discipline was imposed only on students.
Armstrong County commissioners, however, extended the ban on students in grades nine to 12 attending hockey games at the Belmont complex to include grades seven and eight, as well. In addition, high school administrators have demanded that the Armstrong hockey association hire two security guards for all future games.
High school hockey in western Pennsylvania is not a school-sponsored sport, but a club sport run by parents and boosters at each school.
Posted by planet trans at 7:59 AM