The Dallas Transgender Advocates and Allies are celebrating our lives with the second annual International Transgender Day of Visibility!

Being out today is the cornerstone of our lives for many of us. We have been blessed to spend at least a part of our lives living in our true gender.

As we may celebrate living out and proud we may also pause a moment in recognition of our transgender sisters and brothers still living in seclusion, unable to live in true freedom.

Come join in the celibrations at the Dallas Transgender Advocates and Feministing!
Posted by planet trans at 5:47 PM No comments:

Section 3.1.3 addresses access to bathroom facilities, stating that the GLBT community will not experience harassment and/or discrimination concerning “availability of City facilities” in all “City interactions with the public.”

Section 9.2 of the Executive Order goes further stating, “It shall be a violation of this Executive Order for an employee to fail or refuse to recommend and contract or purchase for award based upon any contractor’s or vendor’s sexual orientation and/or gender identity; or to fail to make available to any member of the public or employee use of a City facility or receipt of a City service, if that person otherwise would be entitled to such use or receipt, based upon a person’s sexual orientation and/or gender identity; or to impede access by any employee or member of the public to a City restroom facility that is consistent with and appropriate to that person’s expression of gender identity…”

Full article at TG Center News: City of Houston ENDA Passed
Posted by planet trans at 7:08 AM No comments:

Transgender Advocates respond to promised changes to 'Ticked off trannies with knives' trailer.

In response to a outcry from the transgender community condeming the movie trailer linking a murdered transgender woman, Angie Zapata, with 'Ticked off trannies with knives' movie director Israel Luna has agreed to produce a trailer so that Angie Zapata's name no longer appears.

My initial thought of placing both Angie Zapata and Jorge Mercado's names was to give a disturbing reality to my film about transgender violence. Something horrible and disturbing does happen to my characters in the first half of the film.

After listening to many of the voices in the trans-community I've realized that the association between the names at the beginning of the trailer and the content of the film in it's entirety has been difficult to connect.

I've had time to think about it, and have decided to take their names off the beginning of the trailer. I'll begin working on this later today and have it posted this week. I’m not sure if you noticed, but the trailer on the Tribeca site has never included the reference.

Thank you for your email and I wish you the best as well.

We are immensely relieved that Angie Zapata's horrific bludgeoning death by Allen Andrade will not be associated directly with this comedy.

However, we are still at odds with any inadvertent associations that this movie may produce with transgender people in real life.

We therefore ask Israel Luna in his amended trailer to place instead a acknowledgement that that this movie is meant for entertainment purposes only and the fictional personalities therein should not be confused as a portrayal of how transgender people interact socially.

Click the birdie and your status will be updated to

Email ThisBlogThis!Share to TwitterShare to FacebookShare to Pinterest
Labels: TOTWK

Update 3/29 11:49pm Israel Luna has committed to changing the trailer so Angie Zapata's murder would not be connected with this movie.

In a effort to reach out to Israel Luna director of "Ticked off trannies with knifes" I sent him this email over the weekend:

Israel,
I beleive we might have a way to defuse this divisive situation. If you agreed to remove the references to Angie Zapata's murder from the begining of the trailer I beleive most including myself would view this film in a very different light,

What I said before stands, I wish you the best,

Israel Luna has not responded to this email and the trailer remains unchanged.

Israel Luna is intentionally and with forethought slandering transgender people with a slur that would be used in the court of law by the prosecutor to prove a aggravated assault was in fact a hate crime.

*Israel Luna was fully cognisant of the offensiveness of his movie before it went into production.

The announcement of his project came as a comment by him on a Dallas Voice Blog article which was the very post that responded to my objection to the Dallas Voices indiscriminate and often use of the word "tranny".

Luna, frustrated after receiving objections from the overwhelming majority of commenter's to the name and content of his planned movie singled me out for attack since I was the most outspoken. In a lowlife maneuver Luna attempted to shame me into silence by OUTING me as a pre-op transsexual.

Outing someone intentionally ia a act of violence meant to endanger their well being. However I was not and am not ashamed of my poverty I endure since transitioning that prohibits me from obtaining sexual reassignment surgery.

Israel Luna is seeking wealth and fame by intentionally antagonizing and marginalizing transgender people. That deserves the recognition it is owed.

This movie may very well be shown at the Tribeca and the Q Cinemas in Fort Worth as planned regardless, but notice to all who will pay tribute to this tragic betrayal of their transgender brethren. You are paying homage to a deceitful and malicious man who's only joy is in tearing our society apart.

Do you believe Luna will be sedated by targeting transgender people exclusively? And so what if he does, you're not transgender?

You say you are already out so who cares? You trans/gay closeted child loves

you and needs a chance in life. Your fellow church member who lives in fear of being outed deserves your concern. The unborn transgender, gay and lesbians who have yet to face a homophobic/transphobic family and society deserve better from you.
Posted by planet trans at 7:07 AM 3 comments:

We've seen the passion Speaker Pelosi brought to the challenge of passing health care reform. Now more than ever, we need her passion and skill to achieve the passage of ENDA. Please join Cleve Jones, the Courage Campaign and GetEQUAL in adding your name to this petition that we will hand-deliver to Speaker Pelosi:

With health care legislation passing, now is the time to institute workplace protections for lesbian, gay, bisexual, and transgender people by passing the Employment Non-Discrimination Act.

Rep. Tammy Baldwin says she believes that we have the votes to pass ENDA, and Rep. George Miller has said the bill is ready to come out of committee now that the health care bill has passed.

As Speaker of the House of Representatives, we call on you to act boldly and decisively and bring ENDA to the floor for a vote now.

Click here to go to the petition site
Posted by planet trans at 5:56 AM No comments:

My dear friends, every once in a while we get some news so fantastic, so wonderful we just want to shout it out, I am in love with life! I love life so much I have declared myself free! Free to live to day as whom I truly am. Free to live my life with my arms wide open! 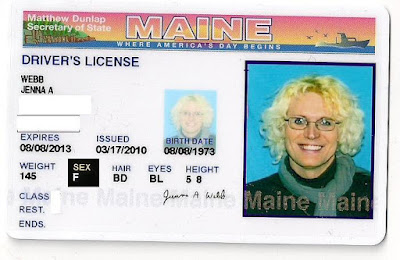 This is a day of celebration unlike any other a person may have. It is our day of transbirthday!

Jenna, ecstatic that her gender marker was changed to show who she knows with her heart she truly is shared her joy with me. This is a unique celebration that only transgender people have. It is a meeting place we can all gather at for a moment and forget about the trials and tribulations that have defined our trip.

Jenna, my dear friend thank you for making our day so valuable by sharing this day with us!
Posted by planet trans at 8:11 AM 2 comments: