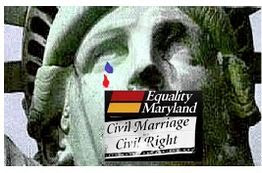 Animosity towards EQMD's promotion of HB235 and its tyrannical oppression of transgender people's free will must not overflow the banks and spill out on Marriage equality efforts and other Equality Federations.

I fully support marriage equality and will continue my passionate advocacy so that EVERY child may know a secure, loving family environment free of worries created by domestic partnerships and civil contracts.

Our saving grace has always been and will continue to be our allies. As hard as it is to believe right now, there are Cisgender people some just across the river from Maryland who see thru this ruse and will openly object to Equality Maryland forcing HB235 as written on Maryland's transgender population. 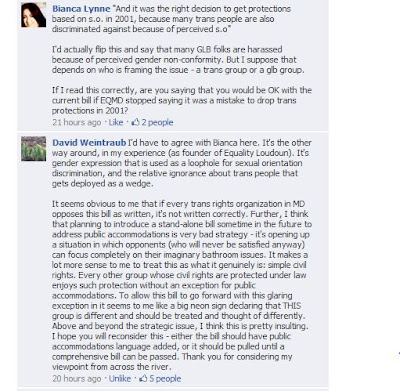 "It seems obvious to me that if every trans rights organization in MD opposes this bill as written, it's not written correctly. Further, I think that planning to introduce a stand-alone bill sometime in the future to address public accommodations is very bad strategy - it's opening up a situation in which opponents (who will never be satisfied anyway) can focus completely on their imaginary bathroom issues."

Prior to posting his comment David had only heard what Equality Maryland had told him and asked me why transgender were so outraged about HB235. David listened to Jenna Fischetti, founder TransMaryland interview on TransFM Radio and David told me he knew he had to act.

Video streaming by Ustream
Like I said, I fully support ALL federation work towards achieving full marriage equality EXCEPT when transgender rights are traded for marriage equality as it has been done by EQMD.

FOR the purpose of prohibiting discrimination based on gender identity with regard to public accommodations, housing, and employment.

Last year sixty one Maryland delegate signed on. Publicly the proposed plan was to resubmit the HB1022 in 2011 as announced by lead sponsor of HB235 currently in the House:

On Febuary 2, 2011 Delegate Joseline Pena-Melnyk was quoted on Gay life

"The Gender Identity Anti-Discrimination Act will be sponsored by Delegate Joseline Pena-Melnyk (D-21). It defines gender identity as a “gender-related identity, appearance, expression or behavior of an individual regardless of the individual’s assigned sex at birth.” This legislation adds gender identity to anti-discrimination protections already granted on “the grounds of race, sex, age, color, creed, national origin, marital status, sexual orientation or disability.” Discrimination would be “prohibited in the areas of employment, housing, credit and public accommodations.”

“This is the year for gender identity and marriage equality. Legislative leaders have been educated. They are messaging affirmatively in the press,” declares Lisa Polyak, a board member of Equality Maryland. She remains optimistic about the chances for both bills in the upcoming General Assembly and ends with a call to action for our community.

Unknown to the transgender community HB235 sans public accommodations was already introduced in the house by Pena-Melnyk with full support of EQMD's DECEPTIVE MINIPULATION!

However then there were some that expressed doubt a full marriage bill would be passed.

"Lynda Dee, lawyer and executive director of AIDS Action Baltimore, urges supporters of the Religious Freedom and Civil Marriage Protection Act to “have a back-up plan. Sometimes you have to compromise.”

"One such compromise could look promising to those weary of the marriage equality debate. State Senator Allan Kittleman (R-9) has stated he will sponsor legislation legalizing civil unions in Maryland. This bill would “preserve the sanctity of marriage” and give same-sex couples all the rights and benefits of a marriage—but without the dreaded “m” word."

Morgan Meneses-Sheets, executive director of Equality Maryland, quickly responded to these sentiments marriage equality might need to be compromised.

It’s marriage or bust. We are not going to accept anything less.”

So public accommodations was thrown to extremist hate groups like Maryland Citizens for Responsible Government who led a venomous attack on the Montgomery County transgender equality bill BUT are strangely silent on HB235.

Maryland Citizens for Responsible Government and the religious demagogues got what they wanted, but why did EQMD do this? The transgender community believes they traded public accommodations in exchange for votes and assurances a dreaded referendum challenging legislative proccess would not be mounted.

"It’s marriage or bust. We are not gong to accept anything less.

Morgan Meneses-Sheets, win or lose your precious marriage bill you are already a whole lot less.
Posted by planet trans at 10:15 AM

Email ThisBlogThis!Share to TwitterShare to FacebookShare to Pinterest
Labels: EQMD Lies and Deceptions

Something doesn't make sense to me: Why is it that MCRG is being silent? I stand by what I said, and I firmly believe it: Those people will never be satisfied. I can't believe that removing public accommodations language would shut them up. They won't be happy until none of us have any rights at all, I've seen enough of them to know that. What would motivate them to agree to a deal that insures marriage equality?